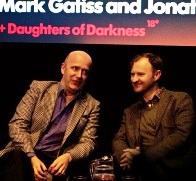 On 11 October, Halloween began early at the Barbican Centre with a screen talk by Mark Gatiss and film critic Jonathan Rigby, followed by a screening of Harry Kümel’s Belgian vampire film Daughters of Darkness (1971). The hour-long discussion covered much the same ground as Gatiss’ BBC4 series A History of Horror – on which Rigby was show consultant – but for fans it was a great opportunity to see in person these two engaging, funny, and impressively knowledgeable horror enthusiasts.

The pair chatted about German Expressionism and the striking black and white images from Robert Wiene’s The Cabinet of Dr Caligari (1920) and F.W. Murnau’s Nosferatu (1922) that stayed with them long before they were able to view the actual films. A large part of the talk was given to Universal’s classic monster movies, which started with Lon Chaney in The Phantom of the Opera (1925) and The Hunchback of Notre Dame (1923) and continued with Béla Lugosi in Dracula (1931) and James Whale’s Frankenstein (1931), which starred Boris Karloff as Frankenstein’s creature and spawned a string of sequels.

However, it was the later Hammer horror adaptations that really captured the imaginations of both Gatiss and Rigby when they were children (Gatiss watched them from the tender age of four and Rigby when he was slightly older but with parental encouragement!). The gothic-infused, melodramatic, and delightfully camp Hammer horror films began with a new version of The Quatermass Experiment (1955) and later movies featured actors such as Christopher Lee and Peter Cushing playing various iconic horror characters. 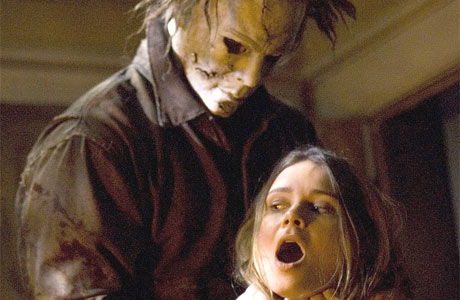 If Gatiss and Rigby were enthusiastic about classic horror films then they were equally passionate in their contempt of the influx of ‘lazy’ remakes after 1980, especially after the creativity of 1970s American horror films such as The Texas Chainsaw Massacre (1974), Halloween (1978) and zombie flicks like Dawn of the Dead (1978).

Screened directly after the talk was the vampire film antithesis of Twilight (2008), Harry Kümel’s highly-stylised and erotically-charged Daughters of Darkness. A recently married young couple, Stefan (John Karlen) and Valerie (Danielle Ouimet) are on their honeymoon when they check into a seaside hotel in Ostend. The couple are there alone until the sun sets and a mysterious and apparently ageless Hungarian countess Elizabeth Báthory (Delphine Seyrig) arrives with her ‘secretary’ Ilona (Andrea Rau). As news spreads that pretty young girls are being tortured and killed, Báthory becomes obsessed with the newlyweds, leading to the four characters becoming embroiled in violent power plays, sadomasochistic sex games, and murder.

The film also explores the dynamics of gender relationships. In feminist readings the lesbian vampire myth is used to express the male fear that female bonding will exclude men and threaten patriarchal society. In Daughters of Darkness, Kümel plays with interpretations of this myth by using moments of camp humour to undercut the tension and create an intriguing ambiguity of gendered power roles.