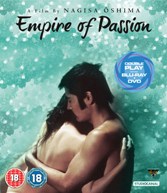 Nagisa Ôshima is no stranger to controversial topics and challenging conflicts, mixing life, death, love, sex and passion into ultimately powerful experiences. He does this once again in Empire of Passion (1978), which follows his borderline sexually-graphic In the Realm of the Senses (1976) with the steps of a younger, less-confident and less-passionate sibling.

The story follows two lovers, Seki and Toyoji, who become entangled in a consuming love affair, which first victim is Seki’s elderly husband, followed by the protagonists themselves. The young, recently demobilised soldier Toyoji’s attraction to the 40-year-old, but still pretty Seki, soon turns into jealousy, which drives him to pull her into a plot to murder her husband, but the act of strangling the rickshaw driver and dumping his body into a well might be more than any of them can handle. The re-appearing silent ghost of Gisaburo is not much help in keeping the lovers together, and the rumours about the adulterous couple and the committed crime build on top of the overwhelming guilt of the culprits, leading them to a life of endless self-torment.

Ôshima is much more subtle in this film and much more focused on each and every move he decides to make. While In the Realm of the Senses resulted in accusations of its over-the-top sexual content, Empire of Passion has been criticised by many to be not sexual enough. 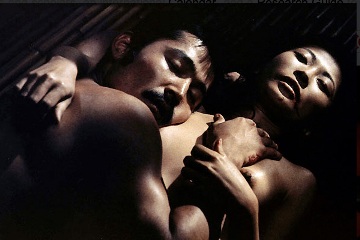 Yet Ôshima remains ultimately precise in his use of passion and in this film he sheds light on another aspect of love – not that of mind-absorbing desire for pleasure, but the aspect of love-provoked actions which lead to unexpected consequences and the amount of guilt, not too much unlike passion itself, has a great power to overwhelm and consume one’s whole mind and destroy one’s life.

Though not sexually-intense, Empire of Passion is a serious, very precise story, which integrates the discourse on love and its all-consuming power, as well as a comment on the social environment and the rules of Japan’s society. This is another one of Ôshima’s skills – to subtly and carefully insert his criticism towards the current social order without putting the focus on those issues, but to leave them just as a statement in the background, as a setting, which leads to the actions of his protagonists and which defines the outcome and the consequences of those actions.

Without many special effects and the power of music, Ôshima is able to create a creepy, unsettling world, where the white almost passive ghost of Gisaburo does not attempt to terrify, but to create discomfort, and to shed light on the emotional torment of Seki, who the audience will soon come to sympathise with, as an oppressed woman in a patriarchal world, whose violation of the rules of society cannot go unpunished.