Blu-ray Review: ‘In the Realm of the Senses’ 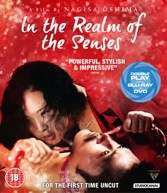 Claimed by many to be a film that blurs the boundaries between art and pornography, Nagisa Ôshima’s In the Realm of the Senses (1976) – starring Tatsuya Fuji, Eiko Matsuda and Aoi Nakajima – is certainly a piece of cinema that presents the viewer with a visual and emotional challenge, pushing the limits of what might be acceptable or appealing to some and remaining vulnerable and wide-open to judgement.

Based on real events, the film follows the life of a maid and former prostitute, Abe Sada, who becomes involved with her married boss Kichi in an obsessive love affair that transcends the carnal and crosses limits that society has imposed. Their sexual obsession only grows stronger and more dangerous and they enclose themselves in that world of passion, making love compulsively, randomly, endlessly, alone or in front of others. Life outside the doors of the chamber, where they share their intimate moments, becomes obsolete, and any experience outside of the embrace of one another is only a painful time spent with the thought of the non present lover.

Nagisa Ôshima creates a film about sexual obsession, but also a film about love and the quest for finding the ultimate pleasure in the embrace of another human being. There is no question that the scenes of sexual nature are more explicit than one would expect, especially for a film which emerged from Japan in the 70s. 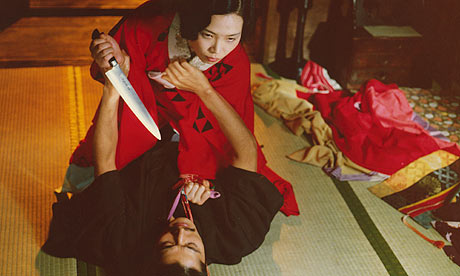 However, a discourse on the pornographic qualities of this film is pointless. The sex is exhibited in a manner which takes a step back from reality, despite being so graphic, and each emphasised scene is appropriate in the context of depicting the growing passion and deeper emotional connection between two human beings, as well as showing depth in character, rather than simply lust.

As their love-making progresses, Saba and Kichi slowly assume their adjusted roles – Saba, that of a dominant, insatiable, shame-free woman, and Kichi, the one of a submissive, all-pleasing and endlessly willing partner, whose desire to give endless pleasure to his loved one results in his all-devoted self-neglect and willingness to fulfil all of Saba’s desires. This is the truly remarkable element of this film – what Ôshima exhibits with untroubled candour is not the carnal, not the sexually-graphic, but the inner development of his two characters, their obsession with desire which, much like a drug addiction, transforms them and alters their behaviour, eliminating the limits of shame, moral and self-preservation.

Yet Ôshima’s film is not an attempt to challenge the audience’s perception of morality or their understanding of what is acceptable in the bedroom and outside between two lovers. In the Realm of the Senses is merely an honest attempt to portray the ever-growing, all-consuming passion, which derives from love, and turns into an endless desire for pleasure and deeper emotional connection, which overcomes everything else in life and surpasses the limits of life itself.