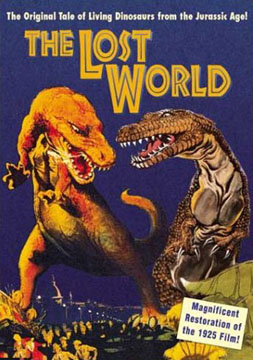 Harry O. Hoyt’s The Lost World (1925) screened as part of the Barbican’s ‘Silent Film & Live Music’ series and was presented in partnership with ‘Bristol Silents’. Scissor Sister’s musical director and keyboard player John Garden has composed an original score for this unique presentation of a seemingly lost classic – restored from nine separate prints to create its longest running incarnation.

O. Hoyt’s adaptation of Sir Arthur Conan Doyle’s novel The Lost World may have been originally released over 80 years ago, but its story about a prehistoric world hidden beyond the boundaries of mankind’s exploration is one which still resonates with audiences today – recently proven by the rerelease of Stephen Spielberg’s Jurassic Park (1993).

Eccentric explorer Professor Challenger’s (Wallace Beery) claim that there are dinosaurs living in the far reaches of the Amazon has made him the laughing stock of the academic world. In the meantime reporter Edward E. Malone (Lloyd Hughes) is desperate to impress his dearly intended Gladys (Alma Bennett), a demanding young women looking for a man who can look fear square in the eye and not flinch. Needless to say, when Professor Challenger dares his critics to accompany him on another expedition to the Amazon, Malone volunteers straight away. It isn’t long until these intrepid explorers are at the furthest reaches of the world, where Challenger’s claims are dramatically confirmed. 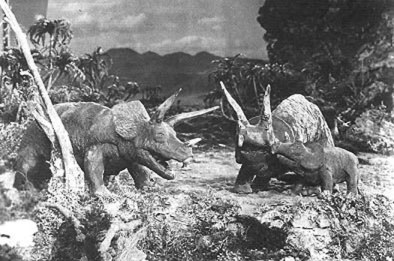 Famous for its pioneering stop motion animation, The Lost World’s special effects expert Willis O’Brien later went on to help create King Kong (1933) where his artistic talents won him and the film much acclaim. Setting the standard for what was to follow, his work here is just as charming, and despite clearly looking dated compared to the multi-million pound visuals we’ve become used to, his artificial world is surprisingly easy to become engrossed in – especially the unforgettable image of an Apatosaurus running riot through the streets of London.

However, it’s Garden’s score of electronic soundscapes which successfully resurrects this dinosaur of a film. Breathing new life into the faded celluloid, his mixture of ominous tones and impending doom disperse the camp humour which was a staple of silent cinema and helps recreate a feel of the horror the film’s original audience must have encountered – a sense of menace otherwise lost on a modern audience brought up on a cinematic diet of computer generated effects and green screen technology. Some may find Garden’s highly stylised soundtrack a little to reminiscent of the synth heavy science fiction films of the 1980s but few will argue that his Brian Eno-inspired score doesn’t encapsulate the sense of wonder and mystery which once accompanied The Lost World.

John Garden continues to tour his spectacular amalgamation of live music and classic cinema throughout October before returning to London to perform at the Natural History Museum. This is a once in a lifetime experience which shouldn’t be missed.