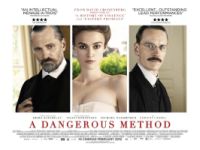 Initial critical responses to David Cronenberg’s latest effort A Dangerous Method (2011) were less than positive following the film’s premiere at this year’s Venice Film Festival. Now screening in the UK for the first time at the BFI London Film Festival, Cronenberg’s psychoanalytical drama is markedly flat and even unremarkable, yet is lifted by two fine performances from Michael Fassbender and Viggo Mortensen.

Based upon Christopher Hampton’s stage play Taking the Cure and John Kerr’s 1993 book A Most Dangerous Method, Cronenberg takes his audience back to early 20th century Europe, exploring the relationship between psychologist heavyweights Sigmund Freud (Mortensen), prodigy Carl Jung (Fassbender) and the latter’s Russian patient Sabina Spielrein (Keira Knightley). After being dragged – literally kicking and screaming – to Jung’s attention, the seemingly unhinged Spielrein quickly becomes the iconic psychologist’s muse, helping him to crystallise some of his earliest theories on repression and familial bonds.

Jung’s relationship with the infamous Freud also blossoms, with the young apprentice keen to expand upon his master’s work. However, Freud’s obsession with sexuality – particularly in regards to psychoanalysis – develops from a harmless sticking point into a clear, definable fracture between the two’s conflicting ideologies. 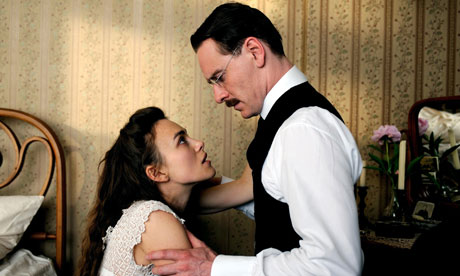 During this tumultuous period, Jung becomes infatuated with Spielrin, himself struggling to come to terms with his own, irrepressible adulterous desires after a word of advice from Vincent Cassel’s Otto Gross – “Never repress anything”.

On paper, A Dangerous Method has all the necessary ingredients needed for a Cronenberg classic – a strong cast, intriguing psychosexual subject matter and a degree of existentialist discourse. However, it’s his usual underlying air of menace and violence that is sorely missing throughout. The flesh is barely touched upon (excluding a few, non-graphic spanking sessions and an incident involving a letter opener), and the film fails to really explore human sexuality and its inevitable deviances to anywhere near the exhaustive level of the highly controversial Crash (1996).

Knightley’s accent has been an issue of some (straying from Russian to something more akin to Dutch), but in the end her OTT performance is simply outclassed by restrained, methodical turns from Fassbender and the superb Mortensen. As Jung and Freud, the pair provide a much-needed foundation to an otherwise shaky, yet even Cronenberg himself has depicted rivalry and ruthless ambition far better previously with the seminal Dead Ringers (1989).

A clear wobble from one of the modern cinema’s greatest living directors, A Dangerous Method remains a functional period piece thanks to fine efforts from Fassbender and Mortensen. Fans of Cronenberg will undoubtedly look to his rumoured follow up to 2007’s Eastern Promises for a more sustained, recognisable effort from the Canadian auteur and proclaimed ‘King of Venereal Horror’.