Barren, evangelical housewife Linda (Harris) discovers that her husband Abe (John Diehl) has been secretly donating to a sperm bank for the past 25 years after he suffers a stroke at the clinic, and consequently decides to drive across the country in order to find Abe’s eldest biological son. This son turns out to be Raymond (O’Leary), a foul-mouthed ex-con with a penchant for drugs and thievery, with whom Linda develops a warped, yet meaningful relationship.

Natural Selection is a well-crafted effort that uses its comedy very carefully to create a number of genuinely touching scenes. The film plays out as a road movie, focusing upon the developing – and dysfunctional – relationship between Linda and Raymond, and both the intriguing subject matter and strong performances make for a comedy-drama that remains fresh and entertaining throughout. 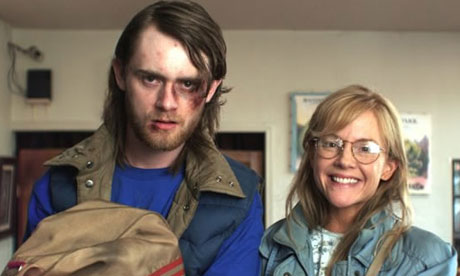 Harris, who is near unrecognisable in ill-fitting jumpers and overly-large glasses, ultimately steals the show as the dowdy Christian housewife and is perfectly offset by O’Leary’s Raymond. Linda traverses the conflict of years of repression and sexual longing, whilst Raymond acts as the ideal catalyst for rebellion and provides O’Leary the chance to demonstrate his acting talent.

The moral issues that the film raises are covered in a sensitive and mature manner. Natural Selection never talks down to its audience, building emotionally-sophisticated characters you cannot help but engage with.

Whilst it is ultimately the comedy and performances that make Natural Selection, the cinematography – particularly in the opening sequence – also cannot go unmentioned. Rarely in comic dramas do you see such skill and attention to aesthetic detail, and it makes the film all the more impressive for it. Natural Selection is certainly one of the highlights of this year’s LFF. Pickering’s skillful direction suggests that he is a fimmaker to keep an eye out for in the future.