★★★★☆
Jonathan Levine’s ‘cancer comedy’ 50/50 (2011) may have grabbed a significant slice of BFI London Film Festival press attention this week, but it is Andreas Dresen’s deeply honest, darkly comic family drama Stopped on Track (Halt auf freier Strecke, 2011) that deserves to win the majority of plaudits thanks to some stellar performances, most notably Milan Peschel as terminally ill, 40-year-old father of two Frank Lange.

After discovering that he has an inoperable brain tumour and mere months to live, Frank understandably struggles to come to terms with his condition. Jovial moments at the family dinner table suddenly turn sour after one of Frank’s emotional meltdowns, much to the bemusement of his young son Mika (Mika Seidel) and daughter Lilli (Talisa Lilly Lemke) – who he has chosen not to inform. 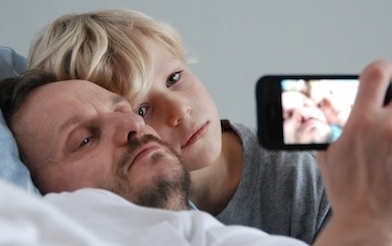 From the very beginning, Frank is shown in slow decline as the cancerous tumour eats away at his body, with first physical then mental repercussions. However, don’t be put off by the bleak subject matter – Stopped on Track is lifted frequently by numerous, truly touching moments of humour and magical realism, steering well clear of miserablist territory. The film also features one of the finest one-liners of the festival so far – a joke involving a hypothetical patient suffering from both cancer and Alzheimer’s – which won’t be spoilt in this review.

Authenticity is key to the success of Dresen’s film – despite a handful of well-placed ‘flights of fancy’ – and is achieved through its heavily-improvised script, its casting of genuine medical personnel as visiting nurses and doctors, and multiple scenes of Frank describing his current condition to a video camera. Stopped on Track’s verisimilitude is what really differentiates itself from comparable efforts, including Levine’s 50/50, in capturing the joys of life, as well as the unavoidable indignity of death and disease. A worthy co-winner of the Prize of Un Certain Regard at this year’s Cannes Film Festival, and your time and appreciation at LFF.