The Monster of Nix (2011) is an entertaining and quirky existential animation from Rosto, featuring the voices of Terry Gilliam and Tom Waits, and is one of the highlights of the 55th BFI London Film Festival’s animation programme. Willy (Joe Eshuis) lives with his grandmother in Nix – a peaceful, secluded community – until a strange, dark force pollutes the world, complete with creepy creatures and scary monsters.

The Monster of Nix’s style falls somewhere between the surreal work of Gilliam (who had no hand in the animation, yet is still clearly a influence) and the child-friendly gothic horror of Tim Burton. In a short time, Rosto creates some fantastic characters and themes, fleshing out a world that leaves you eager to see more and more. 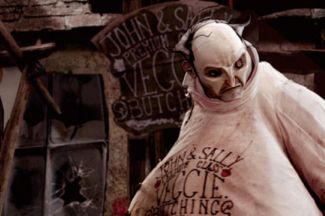 The music is less than conventional and lacks the shoe-tapping quality one normally expects of a musical animation. The songs do add to the atmosphere of the piece, however at times you struggle to follow the lyrics and understand what the characters are actually saying. Surprisingly, this is not a major problem as the excellence of the animation distracts you from this almost completely.

A real problem is that The Monster of Nix may well struggle to find an exact age demographic. Modern audiences tend to be less keen to engage with traditional fairy tales that have all the nasty bits left in. This aside, Rosto’s fantasy is an entertaining piece that shows early signs of a promising animator and imaginative storyteller. Defiantly a highlight of the shorts selection at this year’s LFF, and well worth looking out for.