W.E. (2011) attempts to explore the remarkable love affair between King Edward VIII and the infamous Wallis Simpson (played by James D’Arcy and Andrea Riseborough respectively), yet told with a twist. The film receives its UK premiere tonight at the 55th BFI London Film Festival after a barrage of critical condemnation, but before we start with the Madonna-bashing, let’s take a quick look at the less terrible elements of this bizarre biopic – you could call them the three Cs: choreography, colour and costume.

The above are all apects that Madonna is good at, and in terms of colour she has relied on DoP Hagen Bogdanski to help her out. As for choreography, there are an awful lot of dance scenes in this film, often with somewhat odd musical choices (The Sex Pistols’ Pretty Vacant being one of them): Wallis dancing with her new beau, Wallis dancing with a Maasai warrior, and even swirling umbrellas à la Singin’ in the Rain (1952). As for the third, with this kind of subject matter, you can hardly go wrong in terms of making a sumptuous-looking picture.

Now we’ve got the three Cs out of the picture, let’s look at the storyline. Rather than choosing a straightforward biog of the Nazi-loving lovers, Madonna has gone for a parallel-lives dynamic. Wally Winthrop (named after Wallis, not the Disney robot, and played by Abbie Cornish) is a lonely hausfrau trapped in a Manhattan mansion and a loveless marriage to a Welsh tweed-clad doctor (Richard Coyle). Wally is in her late twenties and has long given up a successful career at Sotheby’s to have a child. Yet how can she have had such a successful career in such a short time span? And how can staying at home alone help a woman to get pregnant? 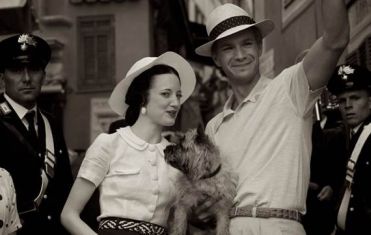 Leaving the unbelievable behind for a moment, we move into Wallis territory when Wally returns to Sotheby’s to view the Edward and Wallis Simpson collection on display. We already know Wally is obsessed with her namesake, as she endlessly watches documentaries about her heroine. Wally picks up and tinkers with the Sotheby’s loot and generally has the run of the place.

The biggest problem with W.E. is the subject herself: why Wallis? She’s hardly a role model and has few redeeming qualities other than her intelligence and the ability to mix a decent cocktail. When Wally’s hubby (a Guy Ritchie figure, in my opinion) criticises Wallis for her Nazi-sympathising, Wally defends her, stating she was merely ‘naïve’. Wallis naïve? And why does the ghost of Wallis appear to Wally in order to offer advice? Is Wally descending into insanity? Then there’s the direction itself, complete with slo-mos, jump shots, grainy scenes and fake footage – it’s all over the place and all too much.

Madonna has returned to the cutting room to salvage W.E., but there’s still too much that needs changing – rather than hormones, how about injecting a truth serum and showing us Wallis and her darling David in their true colours? This advice may come too late to save W.E..