Takashi Shimizu’s Ju-on: The Grudge is rereleased on DVD in two-disc special edition incarnation today, and its ability to chill you to your very core has not even slightly diminished, eight years after release. It’s a relatively straightforward J-horror, but it works to utterly devastating effect. Just don’t watch it alone…or in the dark…or if you have any kind of heart condition.

It’s a horror which follows a supernatural and psychological arc, in typical Japanese tradition. The ‘Ju-on’ of the title is a curse, an extension of a familiar idea in Japan that if someone dies in the grip of a powerful anger, the place where they die is forever stained. So when a woman is murdered by her husband in their family home, her spirit haunts her former home, becoming a house of excruciating horrors for all who dare to step in it.

Plot-wise, it treads in the relatively familiar territory of its homeland but inventively utilises a non-linear narrative, which fits its purpose well. The curse is passed down from victim to victim, and we see each victim’s story through a series of jumpy vignettes, one per character. It’s a structure which also allows for breathing space for the viewer, in between screams. 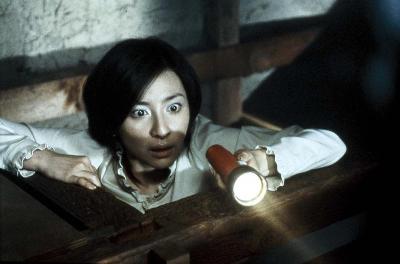 Rest assured, even if you’re not someone who gets ‘scared easily’, after watching Ju-on: The Grudge you will find yourself terrified of being left alone in a house. It is a fantastically visceral experience, a fine example of horror executed with subtlety and efficiency, and director Shimizu confidently frightens his audience without ever having to hack off any limbs with rusty saws for an hour.

The simplest ingredients – small children, unusual reflections, creative sound design – are often the most affecting, and Shimizu demonstrates masterful patience. These are well-worn tropes but their power is undeniable; a tiny corner of the frame filled with a creepy young boy named Toshio can send you into fits of terror.

Ju-on: The Grudge is technically adept, too, coolly visual without ever resorting the obvious. The cursed house is ordinary, suburban, and scenes are rarely overlit – the nightmarish events left to their own devices. And Shimizu uses the camera itself as a weapon in his horror arsenal, in the same way that early Sam Raimi did (apt, since Raimi produced the Sarah Michelle Gellar American remake) – his slow vertical climbs upstairs summon an almost unbearable tension.

Beyond its unconventional structure, Ju-on: The Grudge breaks little new ground in Japanese horror, but it hits all the right notes in such a brutal and striking fashion that your attention is never likely to wane. Let’s not mince words though: it is really, really, really scary. Dedicated horror fans need this on their shelf. For everyone else: don’t say we didn’t warn you.