The original manga version of Gantz shocked even hard-nosed fans when it introduced a whole new level of over-the-top violence, gore, and nudity. The obvious next step was a live action movie that would provide a definitive powerhouse title for a franchise already on its way to the top. But has rookie director Shinsuke Sato’s 2010 adaptation of Gantz done the source material justice?

Gantz’s notoriously convoluted narrative is Sato’s first obstacle in bringing the manga hit to the big screen. Main character Kei Kurono (Kazunari Ninomiya) and Masaru Kato (Kenichi Matsuyama) find themselves in a post-mortem manhunt after they die in an accident. Along with other ‘victims’, the duo must gear up and assassinate a target identified by a strange black sphere called Gantz, which summons them all to an eerie apartment. In exchange for this resurrection from death, the spectres get to live their normal life between their deadly missions.

Their targets are alien creatures of the most bizarre variety, each with their own abilities – the video game ‘boss’ at the end of the level. Every successful hit earns points, and once they reach 100 they are forced to choose between freedom and friendship. 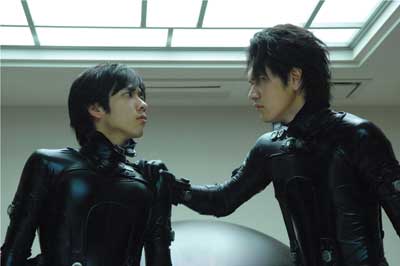 However, Gantz is let down by pretty much everything else on offer. The director’s decision to remove 95% of the violence-sex combo that made the Gantz manga stand out in the first place will disappoint hardcore fans, but then even Japanese cinema can only be so permissive. You get enough action during the film, but not the kind that makes you leave sweaty palm prints on the armchair. For the flashes of visual bravado, Sato’s Gantz ultimately plays it safe.

There seems little point in adapting a story if you can’t make it better, and another Battle Royale (2000) clone is the last thing Japanese cinema needs. So, now it all lies on the shoulders sequel Gantz: Perfect Answer (2011). Good luck, Mr. Sato – your going to need it.