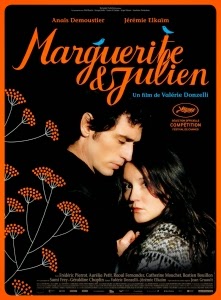 The second French actress turned director to enter the Palme d’Or race, Valérie Donzelli brings to Cannes an overwrought, overblown raspberry of a literary bromance in Marguerite & Julien (2015). When Baz Luhrmann made his adaptation of Romeo and Juliet, he signalled his intention to remix the Bard’s tale of star-crossed lovers by replacing the ‘and’ with a ‘+’. Here, Donzelli and fellow screenwriter Jérémie Elkaïm – who also plays frère Julien – turns the 16th century tale of Julien et Marguerite into Marguerite & Julien, and with it introduces a bunch of postmodern twists, a score of pop songs and soundtracks from other movies, purposeful anachronism and visual trickery – all to little or no avail. The film begins as a tale told by a young woman (Esther Garrel) in a girl’s dormitory – some might argue inappropriately given the ages of her charges – about the legendary sibling lovers. Beginning in childhood, their devotion for each other is looked on with concern by their aristocratic parents (Frederic Pierrot and Aurelia Petit) and elder uncle, who is also a powerful clergyman. Along with his brother Philippe (Bastien Bouillon), Julien is sent off to school where he is apparently taught something terrible because he comes back looking a good decade older than his sister (played by flavour of the moment Anaïs Demoustier). Julien and Marguerite struggle against their own burning incestuous desires, but when Marguerite courts another lover it is only to make her brother jealous. In a last ditch attempt to rescue the couple from their forbidden love, Marguerite is given in marriage to the villainous tax collector Lefebvre (Raoul Fernandez).

Donzelli’s Declaration of War opened the Critics’ Week in 2011 and went on to garner international success. Sadly, Marguerite & Julien is a messy hotchpotch which is unlikely to trouble the Jury’s deliberations for long. Whereas Luhrmann’s Verona Beach added a bizarre,Catholic integrity to Shakespeare’s play, Donzelli’s tricks and trinkets feel arbitrary and showy. A pop song plays over early scenes of puppy love and a series of snapshots depict the apprehension of the fleeing lovers. Helicopters and radios exist along with a king and his court. The love affair that should be the heart of the drama, regardless of the setting, proves a dud. Poses are struck rather than performances and sex scenes in forest look like a photo shoot for a knitwear catalogue gone debauched. Entertainment can be gleaned in the midst of the chaos and a late poem is movingly read to an almost abstract visual sequence of life and growth taking place, but like everything else it feels stuck on rather than integral. As fate closes in on the lovers, the silliness of their own behaviour and Marguerite & Julien in general prevents any pathos from entering the scene. The taboo of incest never troubles as one never truly believe that they are brother and sister – or in love – or anything else.