Whilst critics fell over themselves for Terence Malick’s metaphysical journey The Tree of Life (2011) there was another, less successful but in no way inferior existential examination into creation and spirituality – Michelangelo Frammartino’s sublime Le Quattro Volte (2010).

An old Sheppard is living out his last days in a quiet rustic village set against the hills of Calabria in southern Italy. He meticulously herds goats across the neglected terrain of his rural homeland, believing that the dust he collects from the local church and mixes with his nightly drink helps preserve his dwindling life. What follows is a surprisingly profound and deeply spiritual examination of life and death told through a linear collection of stories which combine to portray the invisible links that connect both the inhabitants and nature that co-exist in this idyllic Italian landscape.

Frammartino’s film has the deceptive look and feel of a documentary, yet it becomes instantly apparent there’s a masterful eye behind the camera. Allowing his subjects to gracefully play out their roles whilst he captures their inner thoughts and motivations with relative ease, this incredibly naturalistic experimental film captures the majesty of life through a calm and leisurely pace. 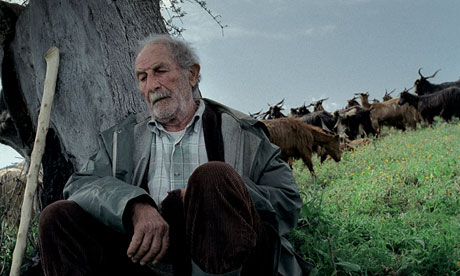 Often described as a ‘slow burner’ Le Quattro Volte’s style is pure observational cinema and despite the minimal dialogue and use of long static shots there remains enough beauty in the film’s mise-en-scene to hold the interest of even the shortest of attention spans.

Told through varying protagonists, this insightful exploration of the transmigration of the soul (Le Quattro Volte’s title translates as ‘The Four Times’ or ‘The Four Phases’) hides a subtle wit behind it’s painterly presented beauty, offering a captivating and at time genuinely moving portrait of life and death in such a slight and simple manner that it becomes impossible not to become entranced, instantly transferring the viewer to this pastoral Mediterranean setting.

Le Quattro Volte’s most electrifying scenes have to be those involving its four legged cast members. The unruly goats (and one absolutely film stealing set piece involving a boisterous sheepdog) are a delight to behold. Allowed to roam free, these wild stars need little direction to express themselves, creating a realistic yet totally mesmerising collection of scenes that are both wholeheartedly entertaining whilst surprisingly moving.

Le Quattro Volte is a remarkable, existential portrait of life and death. A film which pushes the boundaries of what a movie can be – is it art, tentative cinema, or both? Either way you’ll be hard pressed to find a more enlightening or rewarding experience than this.