Reeling from the commercial failure of 1982’s One from the Heart and perhaps wary of his growing reputation as an obsessive monomaniac, in 1983 Francis Ford Coppola decided on The Outsiders – starring Tom Cruise, Matt Dillon, Rob Lowe and Patrick Swayze – as a self-consciously small project. The idea was suggested by a letter he was sent by a class of high-schoolers, who had in turn been inspired by their reading of S.E. Hinton’s precocious debut novel of the same name.

The result was an engaging drama for young adults, “a children’s epic” as Coppola himself once described it. Set in Oklahoma during the sixties, two gangs of teens get together for the odd rumble and generally make life unpleasant for each other in what would otherwise by a fairly nice but boring place.

One of the most striking features of The Outsiders is its cast. A goofy, but not yet toothy Cruise zips around the edges and Emilio Estevez is also impresses. The central part of the drama flicks between a ‘bromance’ between a pre-Karate Kid (1984) Ralph Macchio as Johnny Cade and C. Thomas Howell’s Ponyboy Curtis, with Swayze playing Ponyboy’s older brother Darrel, who has given up everything to try and keep the family together after the death of both parents in an accident. 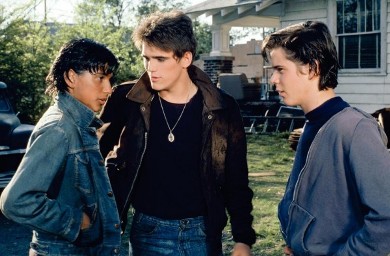 The surrounding gang is dominated by an older boy, Dallas (Dillon), whose nihilistic philosophy of life seems to be leading them into ever more extreme situations. Coppola’s teen drama doesn’t shy away from violence, drinking and drugs, yet the iconic director is always ready with a stylish flourish – the red that seeps across the scene for example to indicate a murder – to soften the impact.

At times, these stylistic interventions are almost operatic – Ponyboy and Johnny watch the sun set in a Technicolor moment worthy of Gone with the Wind (1939). The Outsiders would lead in the same year to Coppola’s minor masterpiece Rumble Fish, which would also star Matt Dillon, as well as Diane Lane and Tom Waits.

For this 2 disc DVD ‘Collector’s Edition’ rerelease, Coppola has clearly tinkered with the film, and unfortunately the results are not an improvement. The bookending of the film is lifted straight from an episode of The Waltons and the re-jigging of the score – taking out Carmine Coppola’s music and replacing it with a veritable jukebox of early sixties rock ‘n’ roll – is often extremely literally-minded. Whilst still a fine effort, it would perhaps be better to seek out The Outsiders in an earlier form.