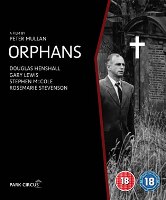 An unconventional, surreal comedy set in the suburbs of Glasgow, Orphans (1998) is Peter Mullan’s first film behind the camera. Best known for his role as a recovering alcoholic in Ken Loach’s My Name Is Joe (1998) and currently seen in Paddy Considine’s Tyrannosaur (2011), Mullan’s acting career has seen him working alongside some of the best British directors of recent times and their teachings have clearly helped him hone his talents to produce Orphans, his profoundly moving directorial debut.

Although Mullan’s wicked sense of humour is absent from the film’s sombre first act, he retains a playful approach to grief that is surprisingly effective. Beginning with the four titular orphans stood around their mother’s coffin, each takes their turn to cut off a small lock of hair and place it alongside the body. When it comes to the eldest, the balding Thomas (Gary Lewis), he struggles to find a big enough chunk and nearly cuts into his own scalp. Moments later, Thomas is found bawling out his mother’s favourite song in a bar to a silent crowd before his younger brother gets into a fight with a cackling patron and is kicked out of the pub.

While Thomas mourns silently, attending to every minute detail of his mother’s memorial as a way of occupying himself, his siblings drunkenly rampage through the streets of Glasgow and for the most part the film follows each of their individual adventures over the course of a night. 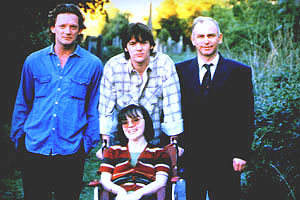 The youngest sibling, the disabled Sheila (Rosemarie Stevenson), finds herself stuck on a hill when her wheelchair runs out of batteries and is adopted by children who take her back to their home. Meanwhile, her brother Michael (Douglas Henshall) finds himself locked in a bar’s cellar having angered the manager and tries to escape. The final sibling, John (Stephen McCole), steals an air rifle from a nearby fair and proceeds to burgle homes.

Each incident becomes more and more surreal as the film goes on, but even though the dark comedy aspects of the film are incredibly funny at its finest moments, Orphans’ blend of humour with the grief suffered by the family is incredibly moving. Mullan’s approach to death is written with a grace and tact that touches beautifully on the the despondency felt at the death of a loved one, and is complimented by his macabre humour, resonant of the emotional chaos that can follow deaths wake.

Orphans is best viewed as a comedy, its morose story providing an effective backdrop for its delightfully dark humour. It’s a wicked, cruel humour, both hilarious and upsetting, that results in a heartfelt look at grief and self-preservation. A powerful debut from Mullan, Orphans is a remarkably honest film and, despite its surreal nature, is beautifully true to life.