The Secret Laughter of Women (1999) is the first and only film to date from director Peter Schwabach and stars Colin Firth and Nia Long. This light-hearted romantic comedy set amongst a Nigerian community in southern France is a somewhat dull example of its genre offering the viewer very little to enjoy. Nimi (Long) is a single mother working as a landscape gardener, whilst also trying to raise her imaginative son Sammy (Fissy Roberts). They live in a Nigerian community that is dominated by a host of traditional matriarchs who are all convinced that in order to be happy, Nimi must marry.

Being a highly devout community, they are also convinced that the best candidate for a husband is the newly-arrived evangelical Rev. Fola (Ariyon Bakare). However, Sammy has other ideas – after a dare from a friend he comes into contact with the author of his favourite sci-fi books, Matthew Field (Firth), who Sammy believes to be perfect for his mother. 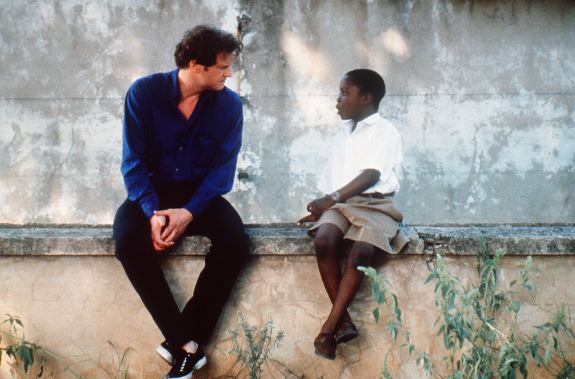 The problem with all rom-coms is that they tend to be on the generic side, which is not always a bad thing. Each one of us occasionally enjoys a light-hearted film that takes us out of the real world for an hour and a half and has a happy ending. The Secret Laughter of Women’s clash between a Nigerian community and a white middle-class writer could provide for interesting viewing; the problem is that it doesn’t.

There’s something mildly offensive about a film that juxtaposes the two communities; the Nigerian community is portrayed as strict, traditional and almost backward, packed full of people uttering clichéd proverbs left, right and centre, whilst the white middle-classes are debauched with, loose morals and overly grand houses, falling into every stereotype one could possibly think of. There’s something overly colonial about the whole story, which makes for uncomfortable viewing.

The Secret Laughter of Women does possess some positive qualities. The script is often witty with some laugh-out-loud moments between Matthew and Sammy, and as mentioned before it is very light-hearted and makes for simple viewing (if somewhat trite). One just wishes there could be a British rom-com with a bit more heart and less middle-class tomfoolery.