The increasingly popular hybrid sub-genre of the martial arts-western gets another entry in the form of Guy Moshe’s second feature, Bunraku (2010) – which stars Josh Hartnett, Woody Harrelson, Ron Perlman and Demi Moore – although the term doesn’t really come close to describing the cultural blend of influences that the director has combined into this film. There’s also a heavy shade of noir, a boatload of expressionist set design and even hints of the musical genre.

Warlord Nicola (Perlman) runs his town with an iron fist and a team of ten trained killers, the best of whom is Killer 2 (Kevin McKidd). It’s to this town that The Drifter (Hartnett) and Yoshi (Gackt Camui) arrive on the same train, yet separate, each determined to defeat and kill Nicola. They are aided along the way by a bartender (Harrelson), Yoshi’s Uncle (Shun Suguta) and cousin Momoko (Emily Kaiho). 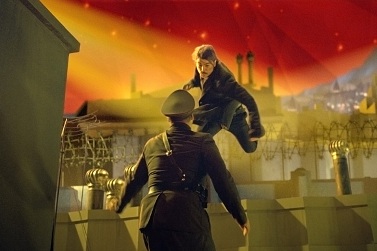 Bunraku’s great charm lies in the sheer gleefulness born of its wacky tone. The title sequence is accompanied by a narrator explaining at great length why no guns will be seen in the film. It’s certainly silly and perhaps a little shallow, but it sets the fairytale tone of the piece beautifully, and the animation is brilliantly put together.

Whilst not a direct adaptation of a specific graphic novel, Moshe’s film draws from the well of comic book movies, with striking similarities to recent efforts as varied as Robert Rodriquez’s Sin City (2005), Edgar Wright’s superior Scott Pilgrim vs. The World (2010) and South Korean cult thriller Oldboy (2003) – which Bunraku appears to directly reference as Josh Hartnett takes on a plethora of villains. Thankfully, the film doesn’t take itself as seriously as Oldboy or Sin City, allowing the many and varied fight sequences to lead the film, free of any heavy-handed plot moments.

The story and the characters are not the most original – nor are they particularly well-drawn – yet Moshe directs his script with such verve that his latest film is irresistible from the first frame. The fight sequences are choreographed to perfection, the sets (at times it looks like the whole city is made of folded, coloured paper) and costumes contribute to the compelling melange, and it is all set to a great, chameleonic score by Terence Blanchard. Bunraku is by no means great cinema, but it is greatly cinematic and incredibly enjoyable.