Hotel Transylvania (2012), the latest animated feature from Sony Pictures Animation starring the voice talents of Adam Sandler, Kevin James, Andy Samberg and Selena Gomez, is pleasingly pure and simple – even for the biggest of kids. The eminent Count Dracula (Sandler) runs a hotel where monsters go to get away from it all. However there’s trouble brewing as his teenage daughter Mavis (Gomez) is determined to go and explore outside world. That is until the hapless Jonathan (Samberg) stumbles upon the hotel and the beautiful Mavis. Dracula soon begins to realise that his real troubles haven’t even begun. 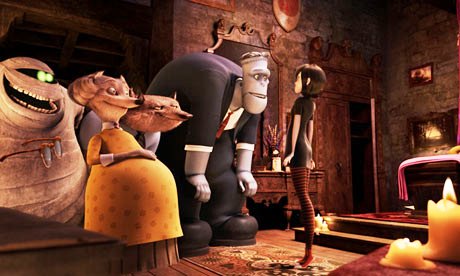 Once upon a time, in the land of cartoons, Disney was king. Aimed primarily at children, adults often accompanied them to see his films under duress and generally only to keep their offspring under control. But now, complete with state of the art animation and three-dimensional characters, no one thinks twice if an adult goes along to see the latest cartoon – with or without the kids. Hotel Transylvania is a case in point, its seamless animation capturing perfectly the essence of the Hollywood’s golden age of horror from the 1930s and 40s in the characters of Dracula, Frankenstein’s monster and the Mummy along with a suitably Gothic castle and Eastern European village in the valley below.

However, it’s the cavalcade of freaks and their witty characterisation, which are the most satisfying. Apart from the idea of a castle where all the ghoulies of the day can holiday in peace without fear of interference from humans, there’s maybe not a lot original in the storyline – after all a parent trying to protect their child from growing up too quickly has been seen before. The way this collection of monster misfits tackle both each other and the threat of human invasion has the right degree of wit and sophistication to amuse adults whilst being zany and slapstick enough to hold children’s attention for ninety minutes.

That the most irritating thing in the whole film is the central character of Dracula – Sandler’s strangulated Eastern European accent soon starts to grate – is disappointing. However, his various house-guests more than compensate for his shortcomings, making Hotel Transylvania one holiday destination guaranteed to book out once it opens its doors to paying guests.