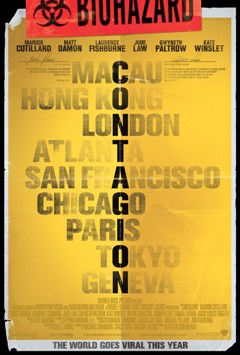 Steven Soderbergh’s Contagion (2011) – with a large ensemble cast including Matt Damon, Laurence Fishburne, Kate Winslet and Jude Law – marks a re-emergence of the old ‘revenge of nature’ genre, but rather than sharks, bees or birds, the enemy to humanity here is much smaller (microscopic in fact) but far more deadly: a killer virus. Contagion premièred at this year’s Venice Film Festival, and CineVue were lucky enough to catch it (the film that is, not the virus).

Returning from a business trip in Hong Kong, Beth (Gwyneth Paltrow) starts to feel a bit under the weather. The symptoms begin to get more serious, and she is rushed to the hospital as other victims follow. As the death-toll begins to rise, the authorities – led by Fishburne’s softly-spoken viral expert Dr. Ellis Cheever – frantically try to find a vaccine.

Employing the multi-strand narrative of Traffic (2000) but also strongly injected with the dynamism of a television procedural (CSI being an obvious reference point), Soderbergh constructs a relentlessly-paced, globe-trotting thriller as we follow doctors, administrators and civilians desperately trying to deal with the virus. Matt Damon, as Paltrow’s husband Mitch, scrambles to save his family as society falls apart around his ears. Looting breaks out in the supermarkets, hospitals are over-run and emergency workers go on strike. It’s not long before mass graves begin to appear.

Contagion’s fragmented narrative style gives some actors more to do than others. Kate Winslet’s un-showy, workman-like turn as a disease expert is one of the highlights, yet Marion Cotillard is entirely and shamefully wasted as a WHO administrator who is sent to China. 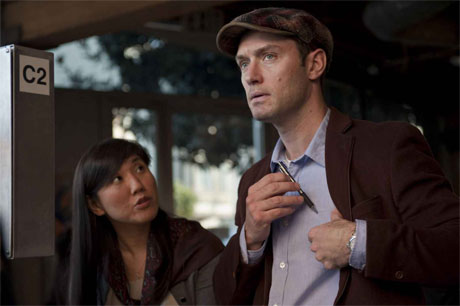 Jude Law’s new-age blogger Alan Krumwiede seeks to exploit the situation to promote an apparent homoeopathic cure. Styling himself as a ‘prophet of truth’, he posts his ideas online and sees his ramblings take on a huge audience. Unfortunately, his inexplicable Australian accent and pantomime villain status makes for one of the more unconvincing aspects of the film.

It seems churlish to criticise such character failings when the film is structured so well, and the bits that don’t quite work are soon disposed of as Contagion’s narrative drives forward. Population numbers soon give way to numbers of fatalities and spread rates. Our own fears are expertly exploited, as Soderbergh allows his camera to linger on each door handle touched, glass sipped from and lift button pressed.

Instead of getting in the way, the film’s scientific content is allowed to control the narrative – Soderbergh has referred to the virus as the main character of the film, albeit a character with no lines. The experts rattle off technical information with both wit and aplomb, even as they begin to worry about what is happening at home. Despite cynicism from Law’s blogger-prophet and the absenteeism of any high-ranking politicians (the unseen US President retires to an undisclosed location), society, or at least its technocratic class, is full of examples of self-sacrifice and dedication, especially among the medical fraternity.

Soderbergh has recently been plagued by his own comments regarding an imminent retirement from filmmaking. Yet with Contagion, he has succeeded in producing a slick and entertaining viral thriller. For all its geographical scope, the film does lack ambition, and at the press conference at Venice the director made it clear that he did not view the virus as a metaphor for anything. Ultimately, Contagion is a film about the spread of a virus, and what you see is what you get.