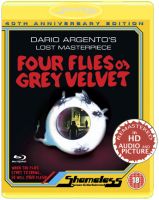 The third film in Dario Argento’s patchy ‘animals trilogy’, Four Flies on Grey Velvet (1971) is one of the filmmaker’s most stylistically satisfying films. Following his astonishing debut The Bird with the Crystal Plumage (1970) and the somewhat weaker Cat o’ Nine Tails (1971), the film has been unavailable for many years due to disagreements with Paramount, with Shameless Entertainment now presenting a near-immaculate restoration to mark the film’s 40th anniversary.

Vacuous rock drummer Michael Brandon is being followed by a mysterious suited man and inadvisedly decides to investigate, all part of an elaborate scheme to frame the dopey protagonist for murder. On paper, the film reads as a completely unspectacular Giallo-by-numbers. However, from the arresting opening sequence of the band performing, Four Flies asserts itself as a technical and stylistic knockout. Argento even frames a shot from inside a guitar as it is being played – just because he can. 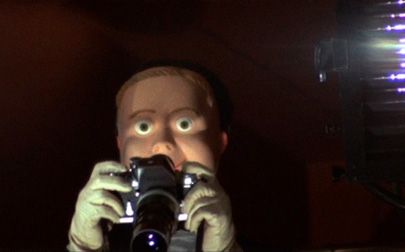 The director’s awkwardness with actors is more apparent here than usual, the characters reduced to props under the eye of Argento’s tirelessly roaming camera. While this is never an really an issue – who watches an Argento film for characterisation and emotional depth – his well-meaning but ultimately patronising and caricatured portrayal of gay characters frequently is. Four Flies’ gay detective is one in a series of misjudged comic interludes that are slightly embarrassing to watch, much like when a drunk friend insists on doing karaoke in a room full of your peers.

Four Flies on Grey Velvet is a film of spectacular sequences, the best of which tell the story whilst astonishing with their virtuosity, the worst simply two-shots of charters frowning, not knowing what to do with their hands and explaining the plot. One recurring scene, a dream depicting a man being beheaded in Saudi Arabia, is amongst the greatest Argento has ever filmed – striking and endlessly disturbing, the motif easily matches Bird with the Crystal Plumage and its celebrated flashback structure for impact.

More playful than later films in many ways, the animal trilogy foreshadows techniques the director went on to trademark throughout his 1970s output: Franco Di Giacomo’s cinematography has aged far better than later works such as Phenomena (1985) and the film showcases easily Argento’s most successfully executed use of point-of-view.

While one could never make the argument for Four Flies on Grey Velvet being anything more than a technical exercise (and certainly not an important film career-wise), the film is exhilarating and visually inventive in a way that only Argento can muster – seek it out.