Films like Lee Tamahori’s The Devil’s Double (2011) – though hard to sit through – demand to be seen, if only to warn the public of what goes on outside their own, safely cocooned world. Based on a true story, Dominic Cooper (Captain America: The First Avenger [2011]) stars in the dual roles of a power mad gangster and a young man tortured both mentally and physically, in this sometimes bizarre, yet often terrifying drama.

Baghdad 1987 – Uday (Cooper), son of the country’s leader Saddam Hussein, requires a body double to fill in for him at events and functions that he doesn’t wish, or are too dangerous for him, to attend. Enter his old school friend Latif Yahia al-Salihi (also played by Cooper), who bares an uncanny resemblance to the coke-snorting, gun-toting playboy. Fearing for his and his family’s lives, Latif is given no choice but to comply with Uday’s demands to double for him, finding himself in an extraordinary world of money, sex and wild parties where everyone is never more than a breath away from death at the hands of Saddam and his psychotic offspring. 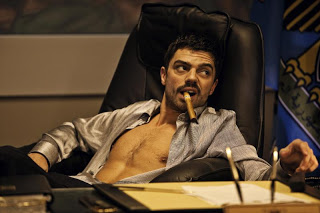 This is a film of doubles on two levels. Firstly the core story of two men who, though they appear physically (after a little cosmetic assistance) almost identical, are poles apart in nature. Uday’s decadent lifestyle, insecurities and total disregard for anyone that stands in his way, are mirrored by the sensitive and caring Latif, who becomes increasingly shocked by the abhorrent behaviour of his former classmate.

Then you have the double standards. At one point Uday takes gruesome revenge (of which those of a squeamish nature may find hard to stomach) upon his father’s righthand man Kamel Hannah (Mem Ferda) whom he accuses of procuring prostitutes for his father hence causing distress to his mother, whilst Uday himself cruises the streets of Baghdad to pick up young schoolgirls for sex. Couple this with the unimaginably opulent and tasteless homes and clothing to which Saddam and his entourage treat themselves whilst their fellow Iraqis live in fear and squalor, and you may begin to sympathise a little with what America did in the country, and the revenge Latif ultimately takes upon Uday.

The Devil’s Double may make unpleasant viewing, but if it serves as even a fictional warning against men like Uday and his father, then it’s harrowing brutality may be justifiable.