Combining the adrenaline-fuelled pursuits of abseiling and mountain climbing with the heart-pounding tension of a horror flavoured thriller, director Julian Gilbey’s A Lonely Place to Die (2011) attempts to meld these exhilarating aspects into an exciting survival drama. Starring Melissa George, Ed Speleers and Sean Harris, A Lonely Place to Die was distinguished enough to be chosen as the closing night film for this year’s Film4 FrightFest – an impressive honour to be bestowed upon any home-grown horror film.

Set in the remote Scottish Highlands, we join five mountaineers on what appears to be a well deserved break from their mundane domestic lives. It’s unclear just how close these five strangers are but it soon becomes apparent they’ll have to work together if their trip is to go ahead as planned. After a brief scare whilst attempting to ascend a rather tricky slope, the group decide that the next day they’ll be less daring and travel across the countryside to a more manageable climb, where the visibility isn’t hampered by the rolling Scottish mist.

However, whilst taking a short break to catch their breath one of the group hears a haunting cry from the surrounding forest. They investigate, only to find a buried underground dungeon – the contents of which turn their pleasant rural escape into a treacherous game of cat and mouse with a group of heartless outlaws. Hot on our protagonist’s tales, these malevolent hunters are clearly driven purely by greed and an unstoppable desire to not let anything, or anyone get in their way. 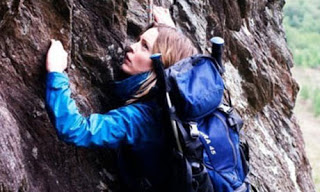 There’s no denying that A Lonely Place to Die is a film with a genuinely interesting premise, that not only showcases an assured cast and crew but also an incredibly commendable drive to create something unique and different from the majority of British feature films.

However, Gilbey’s film has arrived at a time when British cinema is excelling, with 2011 features such as Submarine, Kill List and Attack the Block showcasing a refreshing change of direction from home-grown cinema, moving away from the low-budget kitchen-sink dramas we’ve become accustomed to and successfully branching out into genre cinema. Sadly this national cinematic resurgence dilutes A Lonely Place to Die’s inventive approach – especially as there remain a few niggling flaws that prevent it from joining the ranks of such critically successful British features.

The story manages to keep us gripped for the majority of the film’s run time but due to this lack of any conceivable emotional connection to any of the cast it sadly loses momentum during the final act. That’s not to say we lose interest, but after such a genuinely astonishing twist at the beginning of the second act it feels disappointing to no long be quite so immersed in the action, making the few moments where the film’s meagre budget becomes noticeable hard to ignore and sadly muddying the tension which up until that point had been slowly rising.

A Lonely Place to Die is an accomplished and well-conceived film which up until the final act builds an intriguing degree of tension, but which sadly never quite reaches the dramatic boiling point necessary to make it something more than just a mildly entertaining thriller. It’s obvious there are great things to come from Gilbey, who’s clearly an imaginative and creative director willing to bend the rules of filmmaking – sadly A Lonely Place to Die isn’t that film.