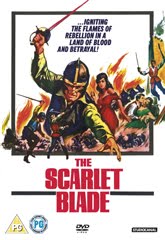 One of Hammer’s lesser-known historical adventures, The Scarlet Blade (1964) proves, if nothing else, that the studio were far better when they stuck to the horror genre. Starring Lionel Jeffries as a power-mad Roundhead and Hammer’s resident heartthrob Oliver Reed as his scheming right-hand man, this tale of Cromwellian England was hardly cutting edge even by Hammer’s oft-dubious standards.

Charles I, after being captured by a group of Roundhead soldiers led by the infamous Colonel Judd (Jeffries) and his henchman Captain Tom Sylvester (Reed), is to be taken to the Tower of London for execution. But they haven’t counted on the mysterious ‘Scarlet Blade’, alias Edward Beverley (Jack Hedley), a Robin Hood-like figure intent on rescuing the king and disrupting the plans of Judd and his troops. 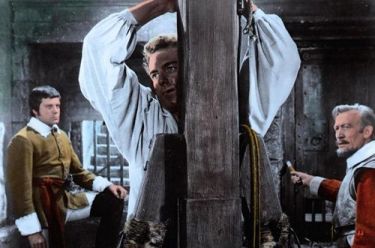 There’s one overriding problem with  The Scarlet Blade  – namely, its lack of horror. By the mid-1960s the studio had become so synonymous with the macabre that anything they did outside of it felt lacklustre. Even their black and white psychological thrillers like the Bette Davis vehicle The Nanny (1965) still leant heavily towards the horrific.

Despite being written and directed by John Gilling – who breathed life into two of the studios best monster pictures with the Cornish ‘freak-shows’ Plague of the Zombies (1966) and The Reptile (1966) – The Scarlet Blade, with its studio-bound aesthetics and hammy, ‘earnest’ acting, fails to make a dramatic impact beyond its 83 minute running time. In accordance with the studio’s economic approach to reusing sets and scenery, many of those from the film would be seen in later outings like Dracula: Prince of Darkness (1966). However, where lack of substance in their horror films could be glossed over by the sheer preposterous nature of the situations, the same shortcomings in the studio’s historical stories are glaringly obvious.

Where the performances are concerned, Jeffries is almost as emotionless as the army colonel he portrays, whilst Hedley soon buckles under the weight of too much swashbuckling. Though June Thorburn is wonderful as Judd’s feisty daughter Claire and Reed more than competent as the characteristically over-the-top rotter type, their performances alone fail to make this a must-see for anyone but the most die hard Hammer fan.