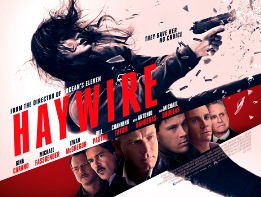 Where have all the action heroines gone? Outside of the cinema of Luc Besson, there seems to be a distinct absence of strong female leads in mainstream action films. With the forthcoming release of Gary Ross’ The Hunger Games (2012) (adapted from the first entry in Suzanne Collins’ dystopian teen trilogy), appetites may soon be sated, but unfortunately, despite the casting of relative unknown actor Gina Carano in the lead role, Steven Soderbergh’s banal new action flick Haywire (2011) is unlikely to add anything of worth to the debate.

Carano plays gun for hire Mallory Kane, who is forced to go AWOL when a contract in Barcelona turns bad, and consequentially ends up doing battle with former lover and boss Kenneth (Ewan McGregor) to clear her name. Also included in the cast are man of the moment Michael Fassbender in a brief yet entertaining role, and Channing Tatum – whose stilted performance adds nothing to what is already an unremarkable and tiresome cliché of a film. The storyline in part replicates the highly successful and entertaining Bourne trilogy, but lacks any of its grit and tension. The action is brutal and at times well-shot, but there is nothing innovative here. 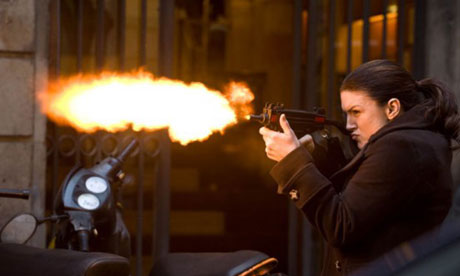 Carano’s wooden and stilted performance lacks any of the dynamism needed for the role. Irritating formulaic scenes are in abundance – Mallory is initially shown to be the strong tomboy type, only to be ‘sexed up’ at a moment’s notice. This simplistic characterisation of femininity is continued throughout. In one particular fight scene, our protagonist crushes a man’s throat between her legs – much like the character of Xenia Onatopp in 1995’s GoldenEye, yet completely absent of the knowing Bond humour.

The shamelessly underused Antonio Banderas makes an appearance as a dastardly Spanish spy, as does Michael Douglas as a US bureaucrat, with both contributing little to the cast of flatly-written characters. Haywire frequently reveals the fact that both the director and writer (Lem Dobbs, who worked on 1998’s highly underrated Dark City) seemingly didn’t understand or more worryingly didn’t care about what they were making.

The action is admittedly enjoyable at times, but your eyes and ears become perpetually distracted by the dull story and weak lead performances – disappointing when you consider that Soderbergh’s last effort, Contagion (2011), was so entertaining. Much like his previous film’s deadly virus, Haywire is to be avoided at all costs.