Based on a true story, Kathryn Bolkovac (Weisz) is a Nebraskan police officer who is offered a lucrative job as a peacekeeper with the United Nations. Unlike other countries participating in the international peacekeeping mission, the US government outsources contracts to private firms who hire staff on its behalf (an issue that continues to cause controversy in both Iraq and Afghanistan).

Kathy is good at her job and is swiftly transferred to the UN’s Gender Office, which deals with investigations into sexual assault and sex trafficking. Inevitably, post-conflict, it is women and children who are the most vulnerable and Kathy is horrified at the extent of the immoral trade in human beings. She discovers a local bar where young, traumatised women, who have been sold into prostitution, are forcibly held in appalling conditions. When she discovers that UN workers and members of the international police force are engaged in the trade and abuse of these women she begins to gather evidence of their complicity. 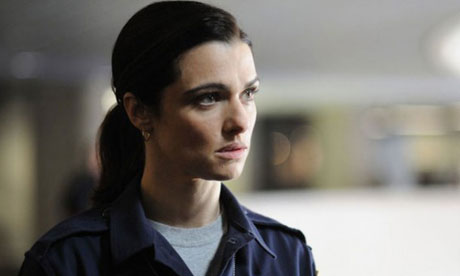 Kondracki gives a human face to her political thriller by interweaving the story of two Ukrainian girls who have been sold into prostitution with Kathy’s own emotional journey. After being rescued from the bar, Kathy promises to help them but the criminal gang’s network is deeply entrenched and her intervention has tragic consequences.

Kathy finds herself increasingly alienated by her male colleagues. After relaying her concerns to her superiors she discovers that many of the peacekeepers are protected by diplomatic immunity. Her bosses prefer to turn a blind eye to atrocities so as not to threaten the rebuilding project. Kathy is labelled a troublemaker and her job is abruptly terminated. In order to clear her name, she blows the whistle on the UN and US State Department’s cover-up.

Weisz is excellent as the principled police officer who risks her own life in taking on the powers that be and there is strong support from Redgrave as her sympathetic boss and David Strathairn as the senior diplomat who helps Kathy.

The Whistleblower is a bold debut from Kondracki. It sheds light on the horrors of sex slavery that continues to this day without feeling preachy or over-worthy. Filmed largely on location in Romania, an evocative setting and a country that has its own share of problems regarding trafficked women, this is an intense, gripping thriller that marks out Kondracki as a talent to watch.