Last month saw the release of the longlist for the forthcoming Best Documentary Oscar at next year’s Academy Awards. Controversy soon followed as it transpired that not only had Asif Kapadia’s remarkable film Senna (2010) been excluded from the list, but so too had Steven James’ critically acclaimed and fascinating 2011 documentary The Interrupters, an inspiring film which follows the turbulent activities of Chicago’s ‘violence interrupters’ across the course of a year in the city’s notorious Englewood borough.

In 2009 – with less than half the year having transpired – 124 people had been killed in Chicago as the result of gun and gang crimes. This horrific figure equated to one death per day, the same number of American soldiers injured across a similar period during the war in Afghanistan. So when the media describes this impoverished area as a ‘war zone’ for once we know it’s not tabloid sensationalism or exaggerated hyperbole by rolling news channels. Indeed, at times this thought-provoking documentary has the same fraught atmosphere associated with cutting edge war journalism but with a subtle, yet incredibly effective vein of social economic commentary running through the heart of it.

To counter the rising crime rate a group by the name of ‘Cease Fire’ are attempting to cure the city of its cultural virus. Made up of ex-cons and former gang leaders (at one point a meeting of these interrupters boast a combined total of 500 years of jail time), Cease Fire uses its connection with the city’s gang culture to reason with these wayward delinquents in ways the police could never achieve. 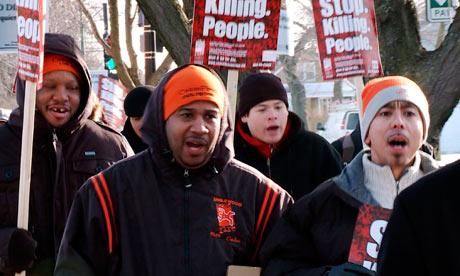 Director Steven James follows three members of Cease Fire across a year of their turbulent lives. Ameena Matthews is a devout Muslim who so happens to be the daughter of one of Chicago’s most notorious criminals; Cobe Williams is a reformed gang leader; and Eddie Bocanegra is a noticeably haunted ex-con who spent 14 years in prison for a murder he committed when he was aged only 17.

The Interrupters is a fascinating and often heartbreaking documentary which thrusts the camera into the centre of these domestic conflicts to produce a genuinely eye opening insight into the devastating events which occur on a daily basis in Englewood. James often uses comedy to lighten the tone of desperation which hangs in the air and whilst the actions and words of both the city’s young offenders and its politicians may strike up emotions of despair, the results of these hard working interrupters makes for some gratifyingly uplifting viewing.

However, whilst the film is interspersed with miraculous stories of redemption, James makes sure we’re well aware of the overriding horror which still dwells outside through the numerous remembrance shrines which litter the streets of Englewood, acting as a constant reminder of how these interrupters may be successfully quashing numerous battles, yet sadly the war still rages on.

The Interrupters is one of this year’s most powerful and absorbing documentaries, shinning a light on numerous domestic difficulties without dwelling on them – instead promoting the hard work of a community which is unwilling to let their city become completely devastated by gang land culture – a fascinating film with an infectious atmosphere of hope in face of overwhelming adversity.