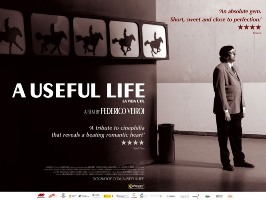 Unlike recent releases such as Hugo (2011) and The Artist (2011) which have paid homage to cinema’s history, Federico Veiroj’s Uruguayan black and white drama A Useful Life (La Vida Útil, 2011) focuses upon the contemporary decline of arts institution funding and the collapse of small independent cinemas. Although A Useful Life is set in Uruguay, the message is one that resonates strongly here in the UK in the light of recent comments by PM David Cameron.

The film focuses on protagonist Jorge (Jorge Jenillek), who has worked at his beloved cinemateca for the past 25 years and has to come to terms with the cinema’s closure, adapting to life beyond his screenings of auteur cinema. At times, this short but intriguing film shines with luminescence as the passion and despair Jorge feels for the situation shines through. There are frequent lingering shots of empty foyers and cinema seats that perpetually echo Jorge’s own isolation within society, and a selection of contrasting internal and external environments intensify the cinema’s mausoleum-like atmosphere, with only the click of the projectors audible. 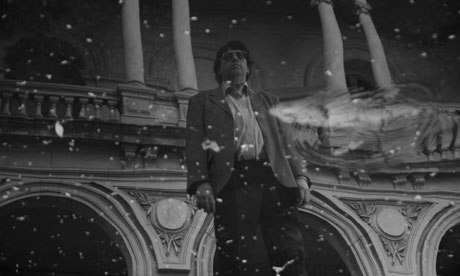 There are some excellent scenes that stand out, including one where Jorge conducts a pseudo-scholarly interview with a man who is discussing film criticism. Both jovial and ironic, it demonstrates the problems surrounding arthouse cinema; namely, that the conversation is often dry and tiresome – most telling is the fact that even a man who loves cinema has become bored with his lot.

As A Useful Life draws to a close, we see Jorge outside of the cinema environment embracing his new life, symbolic of a well-considered film that balances its themes well. However, there are a few niggling problems that prevent Veiroj’s effort from being truly great, including a jarring moment involving the track Los Caballos Perdidos, an ill-fit to the film as a whole.

Veiroj’s A Useful Life is an intriguing film that raises some interesting issues about the future of exhibition in the digital, mainstream-centric age, whilst not completely working as a piece of dramatic cinema in its own right.