Eric Khoo’s biopic animation Tatsumi (2011) – released in UK cinemas this week – brings us the life of artist Yoshihiro Tatsumi, the man credited with coining the term ‘gekiga’ to describe his own alternative form of Japanese manga.

The film is a medley of short vignettes from Tatsumi’s oeuvre, mixed with key episodes from his life and his rise to becoming one of the most celebrated artists of his generation. Tatsumi was born in 1935 and experienced the turbulent years Japan faced through the Second World War and the fall-out of the nuclear attacks perpetrated by America in 1945. One of the most interesting moments is a short story that deals with the attack, where a young photographer captures an image of a nuclear shadow that appears to be a mother and son embracing.

Whilst the short stories on their own are beautifully crafted short animations, dealing mainly with social dysfunction or Japanese cultural taboos (mainly sexual), the blending of these with the biopic elements fail to cohere together in the structure of the overall film. The themes of the short stories are captivating in their range and their delivery, particularly because modern manga culture has been saturated with mythical monsters both futuristic and historical. As an artist and storyteller, Tatsumi enchants because he takes everyday or historical events, and weaves a sense of the fantastical into them. It comes across in the film, but is unfortunately lost in the poor structure. 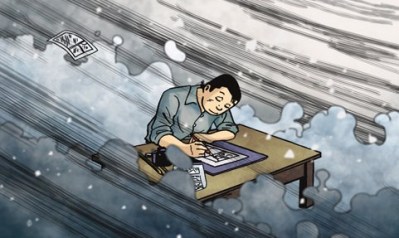 Nevertheless, the film’s disjointed structure doesn’t take away from the quality and style of the animation, which is exceptional. To those unfamiliar with the genre the style of animation is very similar to Vincent Paronnaud and Marjane Satrapi’s poignant animated classic Persepolis (2007). This style of naive animation is capable of being both child-like and sophisticated at once.

In Tatsumi however, the immature dialogue, either poorly translated or simply bad, mars this beauty. The biopic moments are interesting and it is fascinating to watch Yoshihiro’s journey, one of extreme determination and passion. The closing scene is the most captivating as we get to view the artist at work; (though you’ll need to ignore the cheesy transfiguration from animation to real life).

Ultimately, it’s disappointing that a film with so many positive elements falls so flat. Trying to combine a story of work and life is not unusual in biopics, yet Tatsumi would have worked better by separating the two elements – one film being an animated version of his life, the other a collection of his finest short stories. In trying to capture both the man and his work, the film’s pacing is so markedly adrift that it will try the patience of even the most avid of Tatsumi fans.