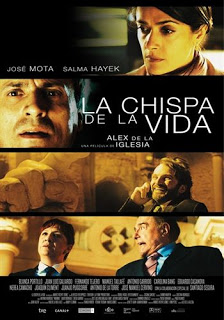 From acclaimed surrealist director Álex de la Iglesia and starring Salma Hayek, As Luck Would Have (La Chispa de la Vida, 2011) it is a satirical comedy that aims to expose our society’s cultural dependency on the output of the sensationalist media industry, fuelled by a mixture of human misery and morbid fascination with fame.

Roberto (Jose Motta) is an unemployed advertising executive who made his name by coming up with the Coca Cola slogan – ‘The Spark of Life’. He’s spent the last two year’s being rejected by every agency in Madrid, even being tuned down by his long time friend after literally pleading for a break. His financial situation is becoming close to critical, pushing him to breaking point, culminating with his confidence declining almost as rapidly as his dignity. However, a cruel twist of fate thrusts Roberto into the media spotlight and not being one to pass up an opportunity, he uses this unexpected podium to garnish some much needed attention. 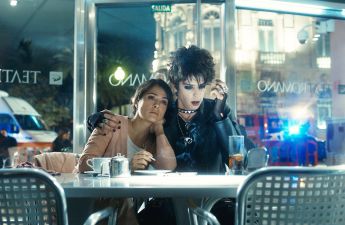 As Luck Would Have It is a tense piece of satirical entertainment that works perfectly as a piece of entertainment, however compared to Iglesia’s previous output its formulaic approach feels incredibly tame – only rarely showcasing this unique directors flare for amplifying the absurdity which often accompanies life’s ecstatic highs and crushing lows.

The film’s message, damming the current state of the media is dealt with in an incredibly whimsical way, with much of the humour failing to translate to an English-speaking audience. However, the tension which surrounds the film’s central incident is handled brilliantly, keeping the audience on the edge of their seat whilst also evoking some awkward, yet necessary laughter through a mixture of inappropriate slapstick and physical comedy.

A film with such a simple, yet ludicrous premise as As Luck Would Have It, relies heavily on the audience being able to connect with its characters, a feat accomplished through the striking performances of Hayek and Motta – both successfully handling the film’s lighthearted comedy and its emotionally weighted conclusion.

Whilst undeniably a disappointing addition to Iglesia’s body of work, As Luck Would Have It remains a highly enjoyable piece of throwaway entertainment which successfully conveys its social message, whilst remaining genuinely riveting throughout.