One of the competition entries for the coveted Golden Bear at this year’s 62nd Berlinale (yet ultimately receiving no awards), Matthias Glasner’s Mercy (Gnade, 2012) comes complete with a solid concept, but unfortunately suffers in its long-winded execution. A morality tale of sorts, the film follows an ex-pat German family whose lives are shattered by a freak accident in their new home, the near-Arctic north Norwegian industrial town of Hammerfest.

As the film begins, we learn that father of the family Niels (Jurgen Vogel) has accepted a contract as an engineer on a Norwegian natural gas liquefying plant, with the intention of taking his wife Maria (Brigit Minichmayr) and teenage son with him. Niels is hardly the perfect father or husband – openly admitting to a past affair and quickly becoming involved with an attractive co-worker upon arrival at his new workplace. Unawares, Maria busies herself as a nurse at a local hospice for the fatally ill, until one night she hits something in the darkness on the way home. With both protagonists wracked with guilt (for different reasons), the family must bind together or face fragmentation in the three month-long twilight that runs from November-January. 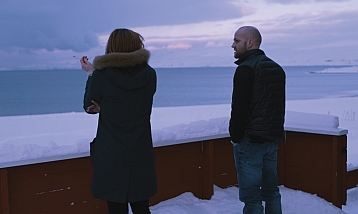 On paper, Glasner’s Mercy has all the necessary ingredients for an evocative, morally-challenging drama – and for the first 45 minutes, the film stays just about on track. However, the pivotal car accident completely resets the audience’s moral compass, leaving us as well-informed about our cast of characters as at the film’s opening.

As the second half unfolds, all parties unfortunately proves themselves to be unlikable, devious and self-serving individuals, more interested in saving face than doing the ‘right thing’. Whilst a certain moral ambiguity in any multi-narrative drama is always welcome, Glasner seems unable to decides himself just who our sympathies should lie with.

Whilst sharing a number of similar themes with Axel Petersen’s endlessly watchable Swedish effort Avalon (2011) (which also screening at this year’s Berlinale, residing in the Forum programme) Glasner’s Mercy is easily one of the most underwhelming dramas to (somehow) have found its way into the Golden Bear race. Trite, predictable and with too few saving graces (its stunning location and crisp cinematography serving as perhaps the only two positives), those looking for an A Separation-esque tale of contradicting testimonies and moral corruption should perhaps look elsewhere.