Setting up base camp in the Panorama programme at this year’s 62nd Berlinale, Cao Hamburger’s Xingu (2012) is an extremely engrossing, well-executed and well-meaning dramatisation of the formation of Brazil’s enormous Xingu National Park (referred to as ‘Belgium in the film due to its immense size), one of the world’s reserves for indigenous peoples.

Beginning as a Herzogian journey into the great untamed South American expanses, Xingu follows the intrepid Villas Boas brothers – Claudio (João Miguel), Leonardo (Caio Blat) and Orlando (Felipe Camargo) – as they sign up for for an exploratory expedition into Brazil’s presumed-uninhabited hinterlands in the 1940s. Upon arriving at the mighty Xingu river, the fatigued white explorers soon encounter an advanced patrol belonging to a local indigenous encampment. Won over by Claudio’s generosity and motivated by their own curiosity, the tribesman welcome the white recon party into their village, even allowing them to build a makeshift runway in order for supply planes to land. 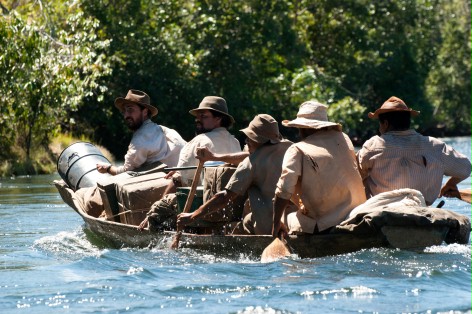 However, it is only a matter of time before disaster strikes, as the indigenous villagers begin to drop dead from hitherto un-encountered European diseases. Medical is requested and administered, but the Villas Boas brothers soon become aware that the only way to protect their accomodating hosts – and the myriad of other remote tribes spread across the Xingu region – is to isolated them from the ‘civilised’ world, providing them with their own bordered national park. Thus begins a 20-year long socio-political war of attrition between the valiant Villas Boas clan and a host of greedy Brazilian land tycoons, keen to exploit this vast, untouched wilderness for their own financial and political gain.

There is much to admire in Hamburgers docudrama – despite early reservations, the three Villas Boas brothers are not the saintly archetypes of legend but complex, conflicted characters struggling to grasp the enormity of the task at hand. João Miguel is particularly impressive in the lead role, an educated man-of-adventure who seems to become seduced by his own press and sense of moral righteousness.

Hamburger himself also brings a great deal of greater truth to this tale of pioneering eco warriors, taking several leafs out of the Werner Herzog book of existentialism, whilst also seemingly taking great influence from Terrence Malick’s underrated colonial tale The New World (2005) in its exploration of interracial politics – both social and sexual.

With a producer credit for City of God (2002) director Fernando Meirelles, a recognisable cast of Brazilian stars (including Maria Flor, last seen in Meirelles’ truly awful London Film Festival-opening flop 360 [2011]), and the stunning Xingu National Park as its picturesque, leafy backdrop, Hamburger’s Xingu is a welcome surprise – an ecologically-aware drama that doesn’t feel the need to ram its message down its audience’s throat.