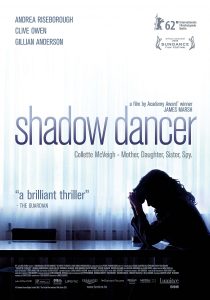 James Marsh returns to fiction after a successful foray into documentary filmmaking with Shadow Dancer (2012), a harrowing thriller focusing on the troubles in Northern Ireland. Set in Belfast during the height of the IRA bombings, Marsh’s psychological tale of the domestic implications of this much published conflict stars Clive Owen, Gillian Anderson and Andrea Riseborough – fresh from her appearance in Madonna’s derided W.E. (2011). Colette (Riseborough) was first exposed to the bloody consequences of the Northern Irish conflict as a child when her little brother was caught in the crossfire of British Security Forces whilst out on an errand for his father. 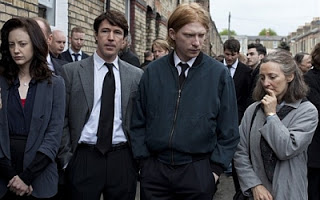 Year’s later, Colette is now a mother and like most of her family, part of the Republican cause. After a botched bombing attempt in London, Colette is arrested. However, she’s spared jail when a British agent by the name of Mac (Owen) offers her freedom in exchange for inside information on her families future terrorist activities. Colette, concerned about the welfare of her son begrudgingly accepts the offer, but all is not as it seems and Colette and Mac soon discover their agreement is little more than a distraction. Marsh’s previous documentaries relied on a heightened degree of tension (Man on a Wire) and compassion (Project Nim), it seems strange that Shadow Dancer is almost completely devoid of both.

The actors deal with their roles as if completely uninterested, never evoking even the slightest emotional reaction from the audience who could easily have mistaken what they’re viewing for a 1980’s TV movie. Considering the potential for an exhilarating cat and mouse thriller, Shadow Dancer is a complete disappointment, failing to effectively make the audience care for its protagonists and in doing so leaving them with little more than a slow burning political thriller with an outdated socio-political message. Marsh manages to capture the ridiculous nature of the Northern Ireland conflict, depicting a war fought through the false façade of religious beliefs, where violence was perceived to speak much louder than words.

However, this is no revelation in itself, and whilst film’s like Steve McQueen’s superlative Hunger (2008) managed to show the futility of this conflict in a fresh and new perspective, Shadow Dancer just feels like its treading over old ground. Incredibly mundane and completely lacking in suspense, Shadow Dancer has neither the dramatic power or social importance to become little more than a late night thriller. A disappointment, especially when considering the cinematic quality Marsh had previously installed into his critically acclaimed documentaries.