Miguel Gomes’ third feature Tabu (2012) is an impassioned love story which draws its influences from the early romantic era of 1930’s Hollywood filmmaking. Aurora (played by Laura Soveral in her old age and Ana Moreira during her younger years), an elderly Portuguese women with an eccentric personality and a destructive taste for the local casino’s slot machines, lives with her African maid Santa (Isabel Cardoso) in an imposing Lisbon tower block. Her next door neighbour is Miss Pilar (Teresa Madruga), a compassionate catholic who finds herself caring for Aurora as her mental state starts to show signs of deteriorating. 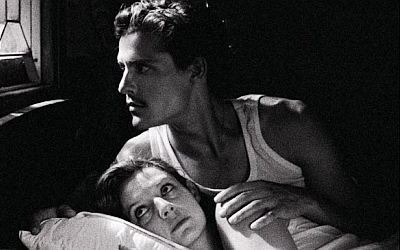 When Aurora is admitted to hospital, Pilar is assigned the task of finding a long lost companion of hers, an Italian man with an outlandish tale of love against adversity set within the shadows of Mount Tabu in Africa. Tabu is stepped in nostalgia, with Gomes painterly presenting his characters in romanticised black and white – a fact only emphasised by Gomes’ decision to name his movie after a F. W. Murnau film.

All this results in a film that radiates a warmth that perfectly compliments its heartbreaking story. Crossing back and forth through time, Tabu successfully differentiates past from present with subtle lighting techniques and the gentle use of soft focus – creating a dream like atmosphere that feels like crossing through a jungle of memories and regrets. Some quirky splashes of comedy help lighten the mood, as do the performances of Madruga and Soveral as the present day elderly ladies who have no one to rely on but themselves.

Tabu is a fantastic film, equally as moving as it is enjoyable and certainly one of the favourites for this year’s Golden Bear award. Playfully switching from the gloom of the present day to the warmth and perceived simplicity of life in the past, Tabu is an enthralling, light-hearted stab at a society unable to escape from imprisoning itself in a cloud of nostalgia.