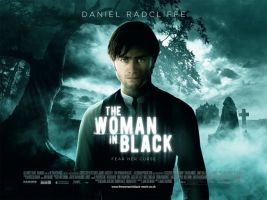 Hammer’s recent resurgence continues with the release of the eagerly anticipated adaptation of Susan Hill’s Gothic ghost story The Woman in Black (2012), starring former Harry Potter lead Daniel Radcliffe. With a suitably spooky screenplay from Jane Goldman and directed by James Watkins (best known for 2008 hoodie horror Eden Lake), the ingredients are all there for The Woman in Black to be an instant cult classic – yet it just falls short of greatness.

Radcliffe stars as Arthur Kipps, a young solicitor who is left to raise his infant son after the death of his beloved wife during childbirth. Kipps is sent on an errand by his London employer to a remote east coast market village in order to broker the sale of what he presumes is a long vacated, isolated mansion in the form of Eel Marsh House. However, on arriving in Crythin Gifford, rumours begin to spread of an ominous apparition, the titular ‘Woman in Black’, the ghost of Alice Drablow who now haunts the deserted manor that she once called home following the tragic death of her son, bringing untold tragedy upon all those who catch the merest glimpse of her. Unperturbed by superstition and with the aid of influential local landowner Sam Daily (Ciarán Hinds), Kipps sets off to the house to carry out his work – with cataclysmic results. 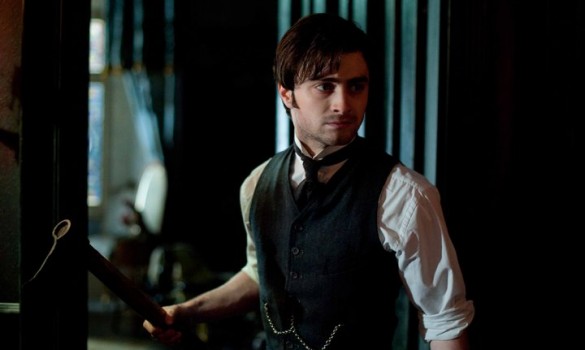 Radcliffe proves himself a more than adequate leading man as Kipps, brushing off all traces of the Potter franchise as he skulks around darkened rooms, candle in hand. His boyish, chiseled features belie a far greater sadness throughout, constantly reminded of his wife’s bloody death seconds after bringing their son into the world. The Woman in Black’s supporting cast are similarly in fine form, with the ever-dependable Hinds resplendent as the world-weary Daily, and Janet McTeer equally convincing as his tortured, seemingly possessed wife.

Just as Hill’s 1983 text beautifully captured the tone and atmosphere of Victorian Britain, Watkins skillfully recalls the classic age of Gothic Hammer horror through some superbly sinister set pieces. The near-derelict confines of the haunted house are brought to life through self-rocking chairs, ghastly mechanical toys and ghoulish effigies, standing up to anything that Guillermo Del Toro and his troupe of Spanish scaremongers have produced in recent years.

However, it is the film’s saccharine denouement that will leave a bad taste in many fan’s mouths. Gone is the nihilistic finale of Hill’s text, replaced with a spiritually-enlightened tying of knots that feels completely out of place given the prior 100-or-so minutes of chilling period drama.

Radcliffe shines and Goldman’s screenplay is suitably bleak, yet The Woman in Black just lacks that final killer blow necessary to send audiences back to their beds with a quickened-pace and one eye on the periphery. Hammer is undoubtedly back as a filmmaking force, but falls marginally short of re-capturing the uncanny ghoulishness of their heyday years.