Jim Henson’s comic creations The Muppets undoubtedly had their heyday in the late 1970s-early 80s with prime-time ratings winner The Muppet Show, a charming blend of family-friendly humour and celebrity cameos from the likes of John Denver, Elton John and Dudley Moore. Now in 2012, Disney are looking to relaunch Kermit the Frog, Miss Piggy and co. with the aid of director James Bobin, comic actor Jason Segel, Amy Adams and an industrial vat of goodwill with the release of franchise reboot The Muppets (2011). This latest outing presents newcomer Walter (voiced by Peter Linz), the world’s number one Muppets fan, along with close friends Gary (Segel) and Mary (Adams). 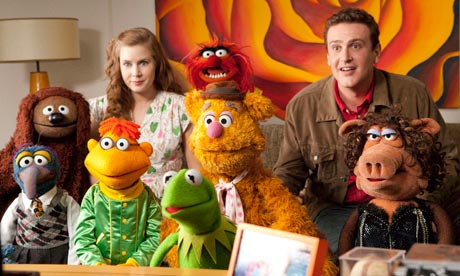 The trio leave the sedate confines of their home in Smalltown, USA for the hustle and bustle of Los Angeles on a whirlwind tour of the now-dilapidated Muppet Studios. After consequently overhearing the sinister plans that villainous oil tycoon Tex Richman (Chris Cooper) has in store for the waning Muppets brand and the hallowed ground underneath their old theatre, Walter and pals set off to reunite the old gang, starting with the totemic Kermit. The Muppets’ brave fight against Cooper’s Machiavellian oil baron has already caused somewhat of a stir in the US, with Fox Business Network anchor Eric Bolling suggesting that the film had a communist agenda and was “trying to brainwash [your] kids against capitalism”. Nice try, Eric.

Cynical cross-promotion aside, Muppets fans will find much to enjoy in this latest outing, with Flight of the Concords star Bret McKenzie penning a number of memorable song and dance numbers, including the Oscar-nominated Muppet or a Man. There are also a number of successful cover versions of contemporary classics, with a barbershop rendition of Nirvana’s Smells Like Teen Spirit likely to raise more than a few wry smiles from older members of the audience. Whether younger audience members will remain patient through the numerous self-referential ‘in-jokes’ (“I can’t believe we had that in the budget.”) may largely depend on the attention span of the individual youngster in question. You get the distinct feeling that The Muppets may be more aimed at those who remember Kermit and co. the first time around than the regular Disney market.

Segel and Adams do an adequate job of representing humanity’s interest in the Muppets’ plight, though one can’t help but wish that screenwriter Segel had ditched weedy and irksome newcomer Walter in favour of a more established Muppets regular as our protagonist. Cooper also comes away looking more than a little foolish – why the filmmakers selected someone so rigidly restricted to straight, serious roles to play the pantomime villain is anyone’s guess (you’re opinion of Cooper’s performance will likely hinge on the first rendition of catchphrase “maniacal laugh”). The Muppets’ flaws are numerous, yet not substantial enough to put off true Muppets fans. Bobin and Segel may fall short of completely revitalising the once moribund franchise in terms of wit and spectacle, but expect the gang’s latest outing to do its singing (and dancing) at the box office thanks to Disney’s well-oiled marketing machine.