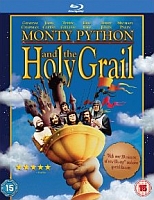 The American writer Chuck Klosterman once wrote how that are things which were over-rated (e.g. Adele), things that were under-rated (e.g. Cat Power) and things that were rated correctly (e.g. The Beatles) – and so it is with Monty Python. The comedy troupe, which began its TV series in the late 1960s and went on to make three masterpieces of comic cinema – including the rereleased Monty Python and the Holy Grail (1975) – are widely considered the most influential British (plus one American) comedy group of all time.

The Holy Grail was the team’s first proper cinematic outing following the success of BBC TV sketch compilation show And Now for Something Completely Different (1971). Retaining the looseness and quick-fire aspect of the sketch show, the quest for the Holy Grail itself arrives part of the way into the film and lends itself perfectly as an excuse for a series of fantastical comic set-pieces as King Arthur (Graham Chapman) and his Knights of the Round Table encounter all that the Dark Ages can throw at them. 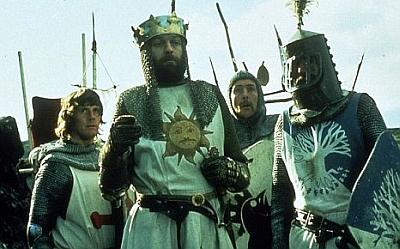 The humour is at once verbal and clever, physical and dark, surreal and yet at the same time making a twisted kind of sense. The daring verve and originality are still striking today (especially in The Holy Grail’s concluding scene), with nothing – nothing at all – that can’t be sacrificed for a good joke. All topics are open to ridicule, be it the French, Anarcho-syndicalism, religion, history documentaries, chivalry and/or malicious wizards name Tim.

The performances are all top notch, with Terry Gilliam’s animated sequence likewise brilliant. As with The Beatles – whose best albums seem like ‘Greatest Hits…’ compilations – it seems utterly incredible that so many classic scenes (“T’is but a scratch’) follow one upon the other. A less happy similarity with The Beatles may, however, be in the way in which seemingly every last ounce of money has been squeezed out of the market with Special Editions and box sets ad nauseam – hence this Blu-ray rerelease.

Python would go on to make the arguably superior Life of Brian (1979) and the frankly mad masterpiece The Meaning of Life (1983), but anyone who is yet to see or owns The Holy Grail could do worse than this Blu-ray package – though there will no doubt be yet another box set special edition in the pipeline for the near future.