With a ‘celebrity’ lineup comprising of such TV icons as Joe Pasquale, Russell Grant, Tony Blackburn and – of course – Keith ‘Cheggers’ Chegwin, it genuinely defies belief that Andy Thompson’s Kill Keith (2011) ever managed to see the light of day. There is no greater example of just how misguided, achingly desperate and painfully unfunny this cinematic abomination is than in its poster, which replicates the iconic Kill Bill (2003) one sheet, with Chegwin taking the place of Uma Thurman.

Essentially a love story at its core, Kill Keith follows the path of Danny (Marc Pickering), a lowly runner on breakfast TV show ‘Up at the Crack of Dawn’ (geddit) who sets out to take the place of the male half of its presenting duo in order to join female co-host Dawn (Susannah Fielding) on the sofa. Hence, a barrage of cringe-worthy ‘jokes’ about waking at ‘the crack of Dawn’ within the film’s opening ten minutes – ultimately setting the tone for what’s to follow. 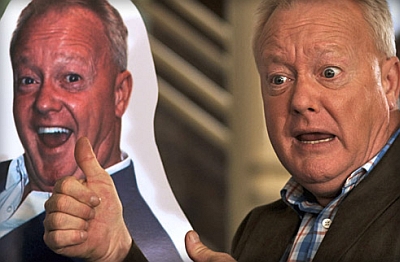 Somewhere along the way, a B-movie slasher element is brought into effect, whereby a host of the nation’s best-loved TV presenters find themselves in the firing line of an unknown killer, which ultimately places Dawn and her potential partnership/romance with Danny at risk, whilst also bringing into play the aforementioned celebrities – each of whom offer up equally pained performances despite their thankfully minimal screen time.

Celebrity cameos aside, Kill Keith’s central cast provide spirited enough performances, but are ultimately unable to lift the overwhelming sense of barrel-scraping desperation seeping from each and every pore of this most bizarre of projects.

The lingering question at the film’s end is ‘why’? Why name a film Kill Keith when it has no connection to its iconic namesake? Why centralise a promotional campaign around Keith Chegwin – especially when his screen time amounts to little more than a glorified cameo? And, most importantly, why would anyone invest any amount of time and money in such an inevitably doomed project? Avoid at all costs.