Film Review: The Fall of the Krays 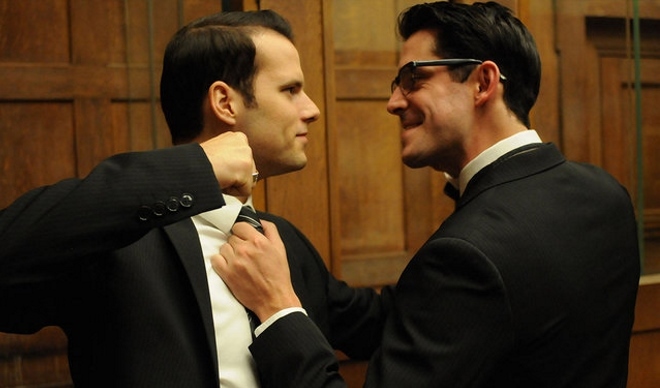 2015 saw something of a Krays craze. Amid the brouhaha surrounding the Tom Hardy double act that was Brian Helgeland’s Legend, a plucky contender sought to muscle in on the red carpet turf of its glitzy, all conquering adversary. Everyone loves an underdog story but sadly there would be no fairytale victory for the lightweight B-movie challenger. Evidently working from a shoestring budget compared with his fellow American director, Zackary Adler brought The Rise of the Krays to the big screen – and DVD bargain bin shortly thereafter. Admirable in its attempt to present the murkier side of London in the 1960s, the film was problematic on a number of levels, not least the complete contrast in appearance of leading men Simon Cotton and Kevin Leslie. It charted the not-so-identical twins’ transition from small time, aggressive ne’er-do-wells to London underworld kingpins through bloody violence, fruity language and plenty of Brylcream.

In time honoured fashion, what goes up must come down and in The Fall of the Krays (2016) the East End brothers’ criminal activity and personal lives take a sharp left towards the decidedly pear-shaped. Although the production values have been improved and the finished article of Adler’s part II looks crisper than the first instalment it’s a laborious, poorly crafted and overly long account of well known material. We pick up where ‘The Rise’ left off. Reggie (Leslie), the lesser of two evils, is to marry his blushing bride. Ron (Cotton) is up to old tricks pressing red hot pokers into some poor undeserving sod’s face just for the hell of it. It’s well documented that Ronnie Kray was a total nutcase and Cotton’s turn is so over the top that any desired air of menace is alternately laughable and exasperating, never convincing. Were it not for the cussing and violence, he’d fit in well as a pantomime villain.

As Reggie, Leslie begins the film with much unwanted bedroom dysfunction on his honeymoon and things don’t improve much thereafter. His performance is as limp and unimpressive as those opening moments and even when anger and aggression are called into action it feels as if he’s simply going through the motions. One dimensional and devoid of any form of redeeming characteristics it’s hard to care for, let alone route for, either of the central figures here. Adler’s direction, along with the script by Ken and Sebastian Brown, is paint by numbers predictable and has more holes than the chap that Reggie stabs repeatedly late on. Elements of the plot are picked up and then forgotten about completely for long periods before either being discarded entirely or belatedly dragged back in.

The police vs. The Krays slice of the pie, which constitutes significant grounds for conflict, is sidelined for so much of the runtime that any sense of victory upon the success of one of the largest operations in UK police history falls as flat as a pancake. Instead, an excursion to Dartmoor sees the boys spring an old acquaintance from jail; then killed for speaking out of turn his character and this entire twenty minute diversion adds the sum total of diddly squat to a narrative that has simultaneously too many superfluous moving parts and nothing of true substance to engage a viewer in any way. All in all, The Fall of the Krays is one to miss. A plodding, methodical thriller that generates little to no tension and is as anti-climactic as they come, it’s ironic that this two-parter does not do justice to two of England’s most infamous lawbreakers.