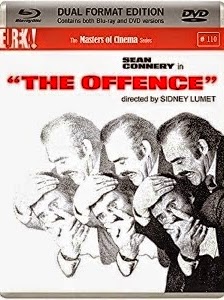 When Sean Connery agreed to return to play James Bond in Diamonds Are Forever (1971), as a sweetener United Artists offered to finance two pictures of Connery’s choosing. One of those pictures was Sidney Lumet’s The Offence (1972), a gritty police drama about a detective sergeant (Connery) who beats to death a suspected child molester. A million miles from the globe-trotting super spy, The Offence takes place in an unlovely England, rain swept place as seen a year earlier in Mike Hodges’ Get Carter (1971). The climate is reflected in the hard-bitten faces of everyone standing around smoking in the office, with women at home and pints coming in bevelled glasses. 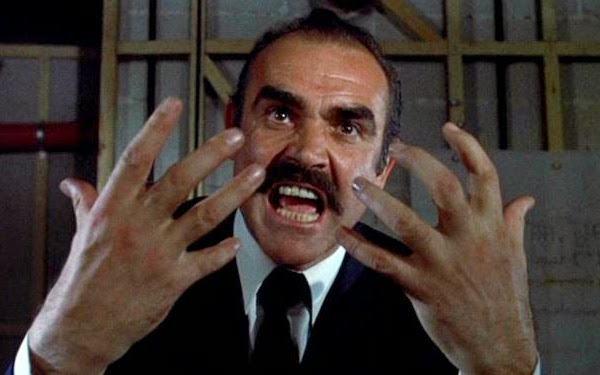 Yet despite its English setting, this is typical Lumet territory, a tale of corruption and rage at the coal face of the justice system. Det. Johnson is an officer full of pent up fury and disturbed longings which complicate his apparently hard-nosed and unambiguous view of the law. A child rapist is on the prowl and Johnson observes the ongoing investigation with contempt for the incompetence of all involved, including his colleagues. A hard man and a hard man to like, he insists on paying for his own drink and speaking his mind even when it gets him into trouble. “We’ve got him scared,” a fellow policeman offers of the perpetrator. “Scared?” Johnson sneers. “He isn’t bloody scared.” And sure enough, another victim goes missing. The police fall back on shaking down homosexuals and rounding up the usual suspects.

When a likely suspect is picked up, it isn’t through a lead, or an expert piece of detection, it’s just because the man was wandering around late at night, staggering with drink. Kenneth Baxter (Ian Bannen), it turns out, is a family man but his clothes are dirty, his face is scratched and he can’t account for his whereabouts for the time in question. With the other detectives failing to get anything useful from him, Johnson decides to have a go, but in the process of the interrogation, he is infuriated by the man and beats him savagely. Johnson is relieved of duty and ordered home where he berates his wife (Vivian Merchant) when she tries to understand him. Screenwriter John Hopkins cut his teeth writing for Z-Cars (which also was an early stomping ground for Ken Loach) and in some ways The Offence is a straightforward tale of a policeman reaching the end of his tether, a morality tale about what happens to those who stare too long into the abyss. However, Lumet uses every technique in the book to create an atmosphere of enervating dread.

With the discordant soundtrack, the use of slow motion and the occasional brief flashbacks to unrelated scenes of violence and horror, we are placed in a position of sharing Johnson seething point of view. The first few minutes are typical with events unfolding in slow incomprehensible motion accompanied by a whine and incoherent noises off. All we know is something wrong has happened. Time will be re-ordered so that the true nature of the crime – the guilt – will become defuse. The Offence is almost the definition of murk, unrelenting and unforgiving. Consolation and possible ways out are offered by Johnson’s wife and a sympathetic superior officer (Trevor Howard) brought in to investigate. But both Johnson and the film scorn any easy way out and resolutely, boldly glare into the darkness, uncertain that there’s anything to see.