Purporting to present a previously unseen story in the build up to the 1968 West German protests and formation of Baader-Meinhof movement, Andres Veigel’s If Not Us, Who? (Wer wenn nicht wir, 2011) is a well-shot, thoroughly researched piece that unfortunately relays little actual historical information to its audience. Nominated for the prestigious Golden Bear prize at the 2011 Berlin Film Festival, Veigel’s film captures the atmosphere of the period well, but fails to give its seemingly wayward cast of revolutionaries any sense of motivation.

The film follows the tumultuous 20-year relationship between anti-fascist writer Bernward Vesper (August Diehl) and his striking muse/political peer Mutter Ensslin (Susanne Lothar). Together, the two young left-wing lovers set about publishing their own series of politicised literature, urging both East and West Germans not to forget the lessons learnt from the all-too recent Second World War. After fathering Vesper’s child, Ensslin becomes infatuated by a young revolutionary in the form of the charismatic Andreas Baader, whose predication for violent forms of protest soon drags the couple into direct confrontation with the powers that be. 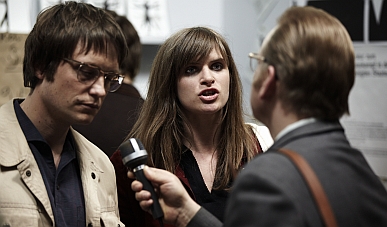 Taking obvious influence from Uli Edel’s 2008 film The Baader Meinhof Complex, If Not Us, Who? begins well but quickly descends into a fairly aimless narrative, driven more by ‘who’s sleeping with who’ than by exploring just why such affluent youths would turn to potential terrorist activities against the state.

The three central actors do their very best with the material at hand, but their work is constantly undermined by clumsy found footage interludes – meant to provide a snapshot of global politics at that precise moment in time – which ultimately could have come from The History Channel’s cutting room floor.

The post-Academy Awards period is a traditional dumping ground for distributors looking to offload awkward or uncategorisble efforts, and sadly If Not Us, Who? falls into that category.