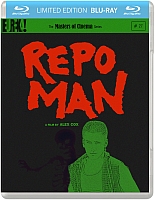 Rereleased on Blu-ray under Eureka’s Masters of Cinema label, 1984 cult classic Repo Man is the debut film of actor, writer and director Alex Cox, and become a sleeper hit amongst sci-fi fans upon release thanks to its hugely entertaining mix of surreal humour and light satire, engaging everything from conspiracy theories to aliens. The film follows Otto (played with comic dexterity by Emilio Estevez), a down-on-his-luck urban punk who has lost both his girlfriend and job in one day. Otto’s fortunes begin to change, however, when he is hustled by repo man Bud (Harry Dean Stanton), who offers him a job reclaiming cars. 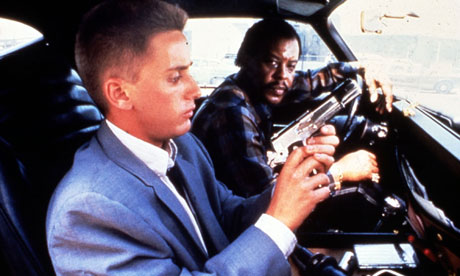 When Bud’s company become involved in the hunt for a mysterious green, glowing 1964 Chevy Malibu driven by a crazed, one-eyed scientist – who appears to be transporting aliens in his boot – the odd couple are taken on a weird and wildly surreal journey into the unknown. Cox’s Repo Man is not only an enjoyable comedy – mainly due to the fine performances by Stanton and Estevez – but also a subtle satire of Ronald Reagan’s presidency, whereby commercialism and religion are exposed in their most negative forms. Whilst the film critiques these elements of society, it’s far from heavy-handed in its approach, providing frequent moments of surreal humour and black comedy.

A surreal and wacky trip that turns the dystopian Los Angeles in which it is set upside down, Repo Man draws on conspiracy theory culture where cloned CIA agents stalk the streets and repo men act like the cowboys of the Old West. On paper, Cox’s debut looks truly ridiculous – a mishmash of car repossession, aliens and punk culture – but it somehow works amazingly well and should be remembered as one of his finest films. A quintessential slice of 1980s of cult cinema, full of laugh-out-loud humour and one of Estevez’s first and best performances, Repo Man has a great deal of re-watch value for those who have viewed before – those who haven’t should certainly seek it out.