Honour, betrayal and deep-seated family resentments collide in The Hollow Crown, the BBC’s lavish adaptation of Shakespeare’s Henriad tetralogy. Originally made as part of the Cultural Olympiad, and with executive producer Sam Mendes overseeing the ambitious project, The Hollow Crown brings together renowned stage and screen directors Rupert Goold, Richard Eyre and Thea Sharrock to chart the rise and fall of three kings of England over half a century, examining how the battle for power affects a nation.

The action begins with Richard II, in which ineffectual monarch Richard (Ben Whishaw) faces rebellion led by his cousin Bolingbroke (Rory Kinnear). It’s a visually stunning and wonderfully inventive version by Goold, which combines fluid camerawork and pastel colour tones with the poetry and beautifully elegiac rhythm of Shakespeare’s verse. There is a fine supporting cast, including Patrick Stewart as a weary, understated John of Gaunt, and David Suchet’s wise old Duke of York, but it is Whishaw who shines with his distinctive portrayal of Richard, the accidental king who was crowned too young and by chance. 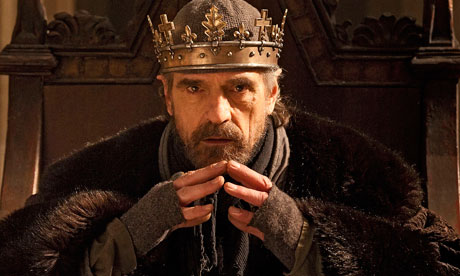 Eyre’s more conventional Henry IV Parts 1 & 2 are rooted in a comparatively earthier reality, but they have the pace and structure of modern television drama. Bolingbroke, now Henry IV (Jeremy Irons), struggles with both the guilt of his ill-gotten crown and attempts to control his wayward son and heir, Prince Hal (Tom Hiddleston). Hal moves freely between the cold solemnity of the court and the squalor of Eastcheap, where he mixes with the rogues and ruffians at Mistress Quickly’s (Julie Walters) local tavern.

Simon Russell Beale’s performance as the cunning wastrel Falstaff has divided opinion, with its emphasis on a melancholy self-awareness, but the interplay between Hal and Falstaff is a delight, swinging from humour to poignancy as the pair recognise their friendship cannot last. Having triumphed against Hotspur (Joe Armstrong) and his rebels at Shrewsbury, Henry IV Part 2 sees Prince Hal increasingly conflicted before he inevitably ditches his lowlife friends and permanently returns to the fold. Eyre skilfully counterbalances Falstaff’s cruel public humiliation with Hal’s touching private reunion with his father, depicted with gravitas and humility by Irons.

Hal’s transformation from drunken, strong-willed tearaway to respected warrior and king (via Hiddleston) is complete by the time we reach Henry V. Sharrock navigates the thorny issue of Henry V’s probably illegitimate claim to the French throne by resisting either glorifying the war or exposing its horrors, as previous versions of the play have done. Instead, this Henry knows the cost of warfare and is weary of his own rhetoric, he is filled with self-doubt and willing himself to believe his own words. Sharrock imbues the famous ‘Once more unto the breach’ scene in particular with a remarkable intimacy, delivered as it is by Henry on one knee to just a few men.

The Hollow Crown utilises the advantages of television production, with extensive on-location filming providing an extra sense of scale in the battle scenes that’s balanced with quieter, more intimate moments in close up. Most importantly, each episode is distinct and exists on its own merits, but works equally effectively as part of a cohesive, well-defined whole. Shakespeare made accessible and exciting, the series is highly recommended.