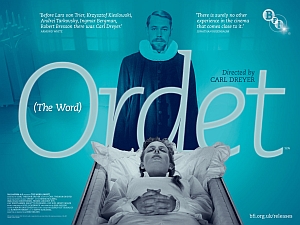 The penultimate film from Danish master Carl Theodor Dreyer, Ordet (The Word, 1955) gets a BFI rerelease this week ahead of a special season celebrating the director’s exceptional body of work. As with many of his films, a tangible air of the uncanny pervades throughout Ordet, forcing the viewer to examine not only their own faith/lack thereof, but the nature of belief systems as a whole. Adapted from a play by Kaj Munk, Dreyer’s Ordet revolves around the Borgens, a humble farming family in 1920s Denmark, lead by devout Christian patriarch Morten (Henrik Malberg).

Following the death of his beloved wife, Morten succeeds in raising his three sons Mikkel (Emil Hass Christensen), Anders (Cay Kristiansen) and Johannes (Preben Lerdorff Rye) into honest, hardworking men – the only setback being that Johannes believes himself to be the resurrection of Jesus Christ. When a tragic event befalls the Borgens, Morten and his sons find themselves questioning their faith, and God’s ultimate plan for the family. 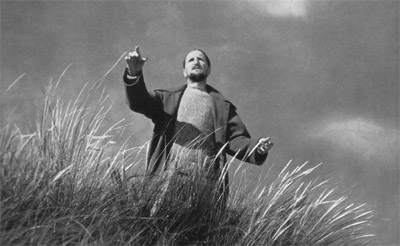 Whilst it could certainly be said that Ordet is a slow burner, with little in the way of defined narrative thrust, this should in no way detract from its cinematic importance to both European and world cinema. Dreyer’s delicate, cautious composition and experimental approach to filmmaking were unique at the time, and his influence – particularly in his handling of existential themes – can still be seen to this day in the films of modern masters such as Nuri Bilge Ceylan.

Ordet’s refreshing approach to spirituality is perhaps one of its key components – thankfully light on overt symbolism – preferring instead to open the floor to its rich cast of farmers, priests and local workers. Dreyer’s own personal stance is also hard to pinpoint, with a number of witty, comedic reposts to deep-seeded theological musings (at one point, Borgen compares his own Christian beliefs with that of his dour, frowning neighbour, stating that while he himself celebrate life, his opposite number embraces death). However, Dreyer’s obsession with religion and its many functions within human society can be seen throughout his oeuvre, and its telling that one of his unfinished projects was to be a film about Christ himself.

Featuring one of the most emotionally gruelling birthing scenes ever committed to celluloid and a stunning performance from Rye as the Jesus-esque Johannes, Ordet should be first on the list for those looking to introduce themselves to Dreyer’s extensive cinematic canon.