British gangster flick Hard Boiled Sweets (2012) is the feature length debut of writer and director David L.G. Hughes, and boasts an all-British cast including Peter Wight (My Week With Marilyn) and Elizabeth Berrington (In Bruges). The film follows the highs and lows of London crime boss Jimmy The Gent (Wight), who’s recently fallen on hard times after new school gangster Leroy (Danny Sapani) moves in on his turf, demanding that Jimmy step down and pay him £1.5 million. Jimmy reluctantly agrees and proceeds to make his monthly tour of London to collect money from those who work for him, ending up in the seedy world of Southend.

Director Hughes has stressed that this film pays homage to the masters of ‘hardboiled’ crime fiction such as Raymond Chandler and Elmore Leonard, yet with a British twist. This might have been the aim, but the result is a rather generic and mediocre gangster movie full of one-dimensional characters and a clichéd plot absent of the charm that his references had in spades. Each of the characters is annoyingly introduced with a cut away linking them to a classic sweet – e.g. a gobstopper, rhubarb and custard – accompanied by an irksome line about their character. 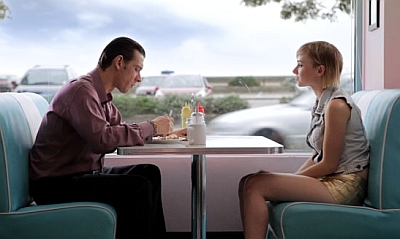 Whilst the aforementioned device is certainly grating, it does function to set up the comic tone of Hard Boiled Sweets. Undoubtedly, Hughes’ film aims to make a joke out of gangster tropes with its overly-stylised approach falling roughly in the black comedy bracket. However, despite such comic attempts, the constant over-the-top dialogue and aesthetics fail to even crack a wry grin.

The film trundles on through its hugely predictable narrative, broken up with numerous sex scenes interspersed with acts of violence. Hughes deliberately tones down both the sex and violence, with neither aspect particularly gratuitous and conversely tame for the genre. Yet the film’s inconsistent tone ultimately lets it down, beginning as a journey into the gritty London/Southend underworld but ending up being more like a late night version of Channel 4’s Hollyoaks.

Ultimately, Hard Boiled Sweets fails to entertain, and stands only as a messy mash-up of cockney gangster stereotypes linked by the theme of old-fashioned sweets – even on paper (sugar or otherwise), that central concept sounds ridiculous.