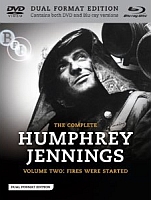 The Complete Humphrey Jennings Volume Two is the second DVD /Blu-ray collection of the British documentary director’s work from the 1941-3 period, including two of his most iconic films, Words for Battle (1941) and Listen to Britain (1942). Jennings’ work cannot be overvalued for their historical significance and cinematic skill, and this collection provides a series of short documentaries that explore every corner of British life.

Jennings is considered one of Britain’s most important filmmakers, yet outside of cineaste circles his name goes unnoticed. This is a real pity, as his films are incredibly evocative of wartime Britain and possess a tremendous historical value. The patriotic nature of his documentaries may sit uncomfortably with modern viewers, yet there is a surprisingly sensitive approach to some of these Ministry of Information commissions. This includes a moment in The Heart of Britain (1941) where an orchestra start playing Beethoven’s ninth symphony, with the voice-over commenting on how the British “still respect the genius of Germany”, following scenes of devastation caused by the Luftwaffe. 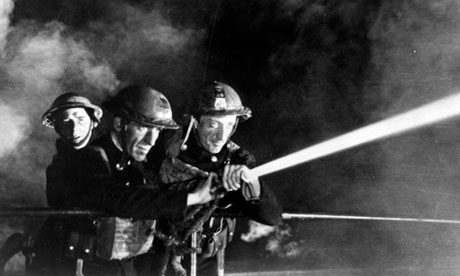 The first four films in the collection, The Heart of Britain, Words for Battle, Listen to Britain and Fires Were Started (1943), are all captivating portraits of wartime British steel. However, Words for Battle – narrated by Sir Laurence Olivier – stands out as a truly remarkable piece of cinema. There is a poetic quality to the film, shifting between cathedrals, mines, fields and stunning vistas whilst hymns such as Jerusalem are used as the soundtrack. This is accompanied by choice texts from Milton and Blake, as well as Winston Churchill’s most famous wartime address (“We shall fight them on the beaches…”) which all come together wonderfully.

The final documentary in the collection, The Silent Valley (1943), is undoubtedly the most interesting. The film opens with a juxtaposition of the situation in a Welsh mining village with an industrial village in Czechoslovakia. Jennings skilfully hypothesises as to just how a Welsh village would survive under German occupation, expertly conveying to audiences the difficulties other countries were facing in war-torn Europe.

Whilst not conventionally entertaining viewing, this second collection of such an Jennings’ work is a wonderful insight to a bygone Britain – an immensely enjoyable collection with great historical value.