It may come as no surprise to devoted East Asian film fans when acclaimed director Johnnie To admits his last two romantic endeavours, Don’t Go Breaking My Heart (2011) and new film Romancing in Thin Air (2012), were made to easily pass the censorship rules in mainland China. However, it would be disingenuous to claim that a film produced for a mass audience would have no artistic value. To’s latest commercial venture certainly confirms his status as the best and most consistent director working in Hong Kong.

Public humiliation erupts in the seemingly perfect life of popular Hong Kong actor and superstar Michael Lau (Louis Koo), as his actress fiancée absconds with her childhood sweetheart on the day of their marriage, all under the spotlight of an unforgiving media. He finds relief at the bottom of a bottle; and in his attempt to escape the hot-in-pursuit paparazzi Michael drunkenly ends up in the back of a woman’s truck, and is consequently whisked away to a faraway village on the mainland. The woman, Sue (a comeback role for Sammi Cheng), has been struck by her own tragedy – her husband Tian was lost in the forest many years earlier – yet she continues whispering prayers for his return, even as everyone around her believes he is dead. 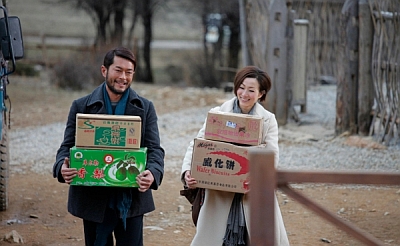 Romancing in Thin Air illustrates its quality throughout, from the overwhelming score by Guy Zerafa to the brilliant cinematography of Cheng Siu-keung. The hauntingly beautiful landscapes of the Yunnan Mountains aptly reflect the shifting mood and tone, from grief-stricken solitude and tranquillity in the wintry forest hills to the insane frenzy and noise of Michael’s media life. So breathtaking are the landscapes of Shangri-La, its no wonder one can get altitude sickness.

The sophisticated plot twists are also a pleasure. To, if he were another director, could’ve simply presented the story of two strangers, both carrying personal drama, meeting in a remote village and falling in love. Yet his films bears the indelible mark of long-time creative partner Wai Fa Kai, and To is able to combine a variety of curiously charming characters and equip them with vital contributions to the story, even if they appear on the screen for no more than five minutes.

Although Romancing in Thin Air should have probably ended with Sue’s tear-strewn face and her whispering “thank you” to the fictionalised ending of Michael’s feature film, To can be more than forgiven for offering the crowd-pleasing generic ending, as the originality and vitality of the preceding 90 minutes more than warrant this pardon.