Despite a somewhat tumultuous production history, with Martin Scorsese and Jonathan Demme both attached to direct at various points, Bob Marley documentary Marley (2012) finally reaches UK screens this month with British filmmaker Kevin Macdonald at the helm. Significantly, Macdonald and Universal’s effort has the full backing of the Marley estate, allowing unprecedented access to the iconic Jamaican reggae star’s friends, family and acquaintances, as well as rarely-seen footage from a number of electric live performances.

Macdonald’s mission statement seems clear – produce the definitive documentary on Marley, encompassing his childhood, musical career, Rastafari beliefs, political activism and numerous romantic entanglements, whilst also providing a platform to sources and speakers that had hitherto gone unheard. To this end, the Oscar-winning director undeniably succeeds, leaving almost no stone unturned as we track the soul rebel’s journey from the ghettos of Trench Town, Jamaica to England, the US, Zimbabwe (formerly Rhodesia) and even the snow-capped mountains of Bavaria – where Marley sought treatment after being diagnosed with terminal cancer. 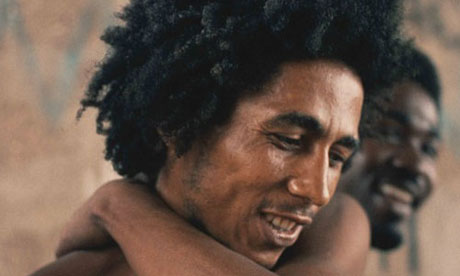 Predictably, there are few dissenting voices. To many, Marley was (and remains) a symbolic figure of not only the reggae movement, but also a flag-bearer for both the Rastafari religion and Jamaican unity. Born Robert Nesta Marley in 1945 to a black mother and white father, Marley ploughed a lonely furrow between ethnic groups (often dismissed as a half-caste or, more often than not, an outcast) until he began producing music with popular local reggae band The Wailers. This became the launch pad for one of music history’s greatest success stories, with the globe-trotting Marley introducing reggae to the world up until his untimely death in 1981.

Whilst one can’t help but hypothesise as to just what type of documentary Scorsese would have been able to produce with the subject matter at hand, Macdonald does a fine – if workmanlike – job of visualising Marley’s ascent to stardom. He’s helped no-end by some stunning live footage of Bob performing across the world, particularly at a peace-rallying concert staged to prevent further bloodshed between the warring PNP (People’s National Party) and JLP (Jamaica Labour Party). Through his music and magnetic personality, Marley even convinced the two opposing leaders to join him on stage, even going as far as to shake hands.

For Marley fans and reggae rookies alike, Marley is an unadulterated cinematic treat, with Macdonald leaving few stones unturned in his quest to comprehensibly cover the life of this unique, deeply spiritual musical icon. This is not to say that we now have the definitive article, but you’d be hard-pushed to ask for a more well-meaning, proficiently directed documentary regarding Marley’s extensive legacy.