Popcorn Horror – the Frankenstein creation of independent filmmaker Felix Gilfedder – is a film app like no other. Founded in Scotland in 2011, Popcorn Horror offers user-generated, bite-sized horror shorts from around the world, all within easy reach of your iPhone. Perfect for horror junkies looking for their daily fix, or independent horror filmmakers keen to promote their own work (and get paid in the process), Popcorn Horror looks set to the be the go-to archive app for scary shorts.

Gilfedder, a filmmaker currently residing in Glasgow, had found a gap in the market for cool horror apps (what he found, he claimed, was poorly made and cheesy). So he decided to start an app channel rather than an online venture in order to keep his costs down and slowly grow the archive. 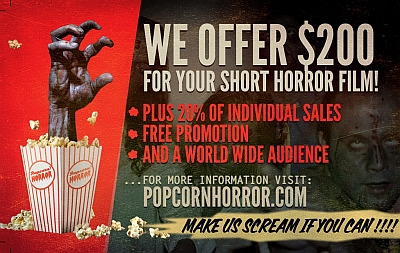 One of the elements that differentiates Popcorn Horror from other film apps is that the filmmaker gets paid – PH is clearly the brainchild of a fellow filmmaker and horror lover, keen to foster an online community. Felix explains that he wanted to create an economy through PH that would allow horror filmmakers to make a financial gain: “I think one of the big questions in an age of open and mass content is how we can find ways of forming new, meaningful and sustainable relationships between audiences and content creators. I would like to think Popcorn Horror is part of that conversation”.

The horror genre has its formulas and conventions, so what Popcorn Horror is looking for is content which takes a fresh perspective, be that in story, design, scares CGI or in performances – what Felix describes as the “show me” effect, leading you to want to show it to someone after you’ve watched it.

Is Popcorn Horror looking for the next David Cronenberg in its online midsts? “I would like to expand into features as well as shorts”, Felix tells me. “I would like Popcorn Horror to be the go-to place for people looking to watch the best independent horror from around the world”. And with a growing archive and online community, it looks like the future is Shining bright for PH.