Lasse Hallström’s latest endeavour Salmon Fishing in the Yemen (2011), an adaptation of the Paul Torday novel, charts the waters of bonnie Scotland, the Thames and, bizarrely, the rivers of Yemen. To find out more about the film and its flowing journey into production, CineVue was in attendance at the recent London press conference for the film. On hand to answer the press gang’s questions was the ever-charming Ewan McGregor, the lovely Emily Blunt, rising star Amr Waked and the film’s producer Paul Webster, whose credit list could go toe-to-toe with some of the best in the game. The first question went to Webster himself:

Scotland looks beautiful in the film. Tell us about finding the locations, and in particular, the castle where the Sheikh lives.

Webster: It was just south of Inverness, in the middle of nowhere. Beautiful place. Great pleasure to work at but it was a complicated place as it was more difficult to get to the Scottish locations than it was to get to the one’s in the desert! Not many people live in the north of Scotland so it was kind of remote. It was great fun, and a very, very beautiful place to work.

Amr, what was you’re experience of the art of salmon fishing before you discovered the film and the book?

Waked: It was actually quite educating. We don’t really have salmon fishing in the Middle-East but we eat salmon, so it was quite interesting to see how this big fish is taken out of the water. It’s quite a special way of fishing. It’s not really like other forms. It takes much more time and needs a lot more physical ability. 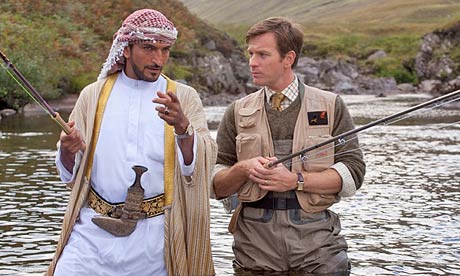 Emily, it’s rumoured that the most excited people when you were cast in this were your mum and dad – have they seen the film? What is their verdict or their critical appraisal so to speak?

Blunt: What they must have liked it a lot because they are going to see it again tonight. I’ve offered them dinner with their long lost daughter, who lives in the states, but they’ve said no [laughs]. They’re going to sit through the film again, because they love it. I think my mum has brought, like, 15 other Blunts with her! After seeing it, my mum said “how refreshing to see such an original, uplifting film.” I think there is an audience fatigue with all of these big blockbuster movies – some of them are great – and people are crying out for great stories and something that will make you feel something in some way.

Ewan, there has been some suggestion that you used a very prissy Scottish accent in the film. Could you tell us why you chose to use that specific accent?

McGregor: Fred’s not Scottish in the book, and I felt like there was no reason why he shouldn’t be, and in actual fact, it would be helpful if he was. I was speaking to Simon, the writer of the screenplay, because I found it really hard to get hold of our director [laughs]. So, I sat down with Simon, and he was the one who suggested the Morningside accent. It’s such an uptight accent and it is perfect for Fred, and regardless of how uptight Fred is at the start of the script, he is like, the sort of romantic lead of the film, so I felt it was important to get it right.

Paul, was this film a tough sell? As Emily suggested, once you see it, the charms are obvious and the strengths of the film, albeit, come from another successful book. Was it a tough sell for you?

Webster: Yes it was. It took the combination of Emily and Ewan and then Lasse joining, on the back of a big hit, Dear John, to get the film moving. I still think the movie is quite a hard sell, particularly in America, with a name like Salmon Fishing in the Yemen. But, I always remember people recommended that the title for Four Weddings and a Funeral should be changed, and call it The Best Man, and now the film has slipped into the lexicon. I think it is a wonderful collision.

Ewan, in the book Fred is written as an older man, and obviously the character has been modified, somewhat, to suit your casting, but do you find yourself drawn to different parts now that reflect the fact that you are a man in your 40s?

McGregor: How dare you [laughs]. I felt that we could have aged me up, with talk about putting silver in my hair or something, but I felt that we could achieve his uptightness with the acting. It wasn’t important to me to make him older. I think it is possible to achieve the same effect. It’s not necessarily an age thing. I mean, nobody is offering me 20-year old leads any more, but like you said, I am in my 40’s, so it’s kind of natural that that is the case.

Webster: I think the book is about second chances, and Mary, Fred’s wife, and Fred, met at University 20 years before, and had just got stuck. So it’s quite possible. I think it’s all about the acting. I think it’s one of Ewan’s best performances. 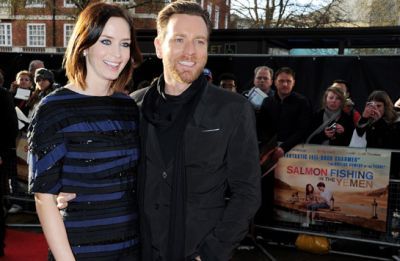 Did you have any knowledge of the locations, and as the only Scot in the principal cast, did you feel like the tour-guide for people when you were up there?

McGregor: No, didn’t have the time. But it was real nice to be up there, in the highlands, and Paul put all of the actors up in a hunting lodge; a rather splendid house, with nice grounds and everything. It was just really nice for everyone to be together. One of the best parts was when Kristin Scott-Thomas took Hamish, the guy who played the butler, out for a whole day, all around the highlands.

The film seems to be about believing in the unbelievable. Is there anything that has happened to your, in your careers that you thought would never happen to you?

Blunt: I never know how to answer that as I don’t feel like there has been a specific job, in my career that I thought was going to be impossible, but I think that the fact I get to do this job, in general, is pretty improbable because it so competitive. I really enjoy the unknown of this job and being quite fatalistic about what is going to happen next.

McGregor: There’s some moments when you go out of your trailer to go on set, and you don’t know how you’re going to do what you’re expected to do, then you come back and you’re like, “oh, that went quite well.”

Waked: My entire career has been linked to fate. This movie itself is linked to fate, as for me I never believed I would be in it, and I never thought it would be so well received. I believe I am a product of fate.

Salmon Fishing in the Yemen is released in UK cinemas on 20 April, 2012.