The recent DocHouse UK premiere of Dara Kell and Christopher Nizza’s Dear Mandela (2011) heralded a surprisingly strong and impacting documentary that depicts the current climate of the first South African post-apartheid generation, who have found themselves suffering at the hands of the African National Congress. Known as the Abahlali, many of these these Shanty town inhabitants have started to rally together and stand up to South Africa’s first democratically elected government. 1994 saw the election of Nelson Mandela, an event met with tumultuous celebration and marked a significant period of change in South Africa, the end of apartheid.

Although it wouldn’t happen overnight, Mandela explained, he vowed to ensure that no longer would people dwell in shacks and everyone will have a home. Seventeen years later, not only are people still stranded, homeless and segregated, they now find themselves defending their dwellings from Mandela’s ANC. More specifically, the ‘Red Ants’ – uniformed workers who are hired to tear down any shacks that have sprung up illegally, with a view to move the homeless to tin can alternative accommodation many kilometres away from Durban. Their tactics are forceful, violent and devastatingly cruel, having opened fire with rubber bullets and set fire to whole communities. 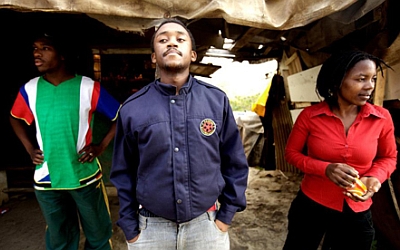 Controversially, the right to do so has been written into the ANC’s constituency in recent years, although no explanation is offered in the film. Clearly the residents were underestimated however, as Dear Mandela follows the resistance from the people to overturn the law and reinstate their right to reside in make-shift shacks. Sadly, despite a positive outcome in this respect, it’s only the first on a very long journey to hold claim to what they have been promised all those years ago.

Mandela is often quoted as having said, “A good head and a good heart are always a formidable combination’”This is a very fitting observation for the focal protagonists in Dear Mandela, three young but wise-beyond-their-years South African slums inhabitants who help lead the demonstrations against Mandela’s ANC. The youngest of the three, Mazwi, is just sixteen and yet he possesses the insight of an older man. He observes that there is no democracy for the poor, and that apartheid is very much still prevalent, but the boundaries have shifted from white and black to rich and poor. Along with Mnikelo, 21, and young mother Zama, they help steer the audience into and around their world, where we see the slanted, minimal shacks that they call home and that they are desperately trying to protect.

The subject matter is very sensitively handled by filmmakers Dara Kell and Christopher Nizza, who choose their subjects wisely and don’t sentimentalise the situation. With Dear Mandela, they have managed to capture the essence of community among the people, incorporate occasional humour and highlight the shared energy and determination that comes with youth, to stand up and make a difference.